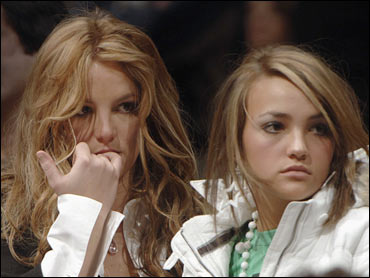 Whether we liked it or not, it seems we couldn't take our eyes off some of the Hollywood stars who were making a name for themselves for all the wrong reasons in 2007.

Celebrity blogger Perez Hilton has made a name for himself by covering the daily minutiae of these people's lives on his popular Web site perezhilton.com.

Hilton stopped by The Early Show dish out his top five celebrity train wrecks of the year, which Hilton describes as "the year of the Hollywood girls gone wild."

It should come as no surprise that Britney Spears topped the list.

"She was by far the person I wrote about the most on my Web site," Hilton told The Early Show co-anchor Maggie Rodriguez. "I mean, she began the year in style in Las Vegas, passing out at a club. Shortly after that went to rehab, left rehab, shaved her head, attacked the paparazzi, went back to rehab, had custody issues with Kevin Federline. I'm only halfway through the year and I'm already exhausted. Had more custody issues with Kevin Federline, had a disastrous VMA performance, released an album that bombed, more custody drama. Thank you, Britney Spears! Being bad is good for my business."

Britney topped the list by far, according to Hilton.

"You could not have scripted everything that happened with Britney Spears this year," Hilton said.

"I blame the mother," Hilton said.

"The fact that how she (Lynne Spears) announced the pregnancy, sold the story to "OK" magazine for $1 million. She's 16. And you know what? And I don't think this is said in the media enough, I do give her (Jamie Lynn) credit for making the tougher decision and keeping the baby, because it could have been so good for her. And hopefully, 2008 she'll be a better mom and try to have that normal life that she says she wants to raising the kids in Louisiana and don't exploit your children.

"You know, Lindsay Lohan was arrested more than once in 2007, was in rehab more than once in 2007," Hilton said. "Hopefully, 2008 will see her out of jail and out of rehab, but I'm not so sure. She is in talks to - once the Hollywood writers strike is over - guest star on "Ugly Betty," so she's trying to make the focus back about her career and not so much being a tabloid sensation.

"(Her) mother wrote a very public, open letter to her daughter. And the father has as well spoken to the media, pretty much saying 'our daughter is a drug addict,' and there is nothing that they can do. They feel very hopeless. You know, 2007 was the year that saw Amy Winehouse break through to America, and her album "Back to Black" sold millions," Hilton said. "And she's nominated for a bunch of Grammy awards, but she may not even be able to come, because in addition to her substance abuse issues, she's currently in the middle of witness tampering trial that her husband's in jail and she may end up in jail, too."

Rounding out the list was a tie between Paris Hilton and Nicole Richie.

"I couldn't choose," Perez Hilton said. "Paris is a train wreck, and so is Nicole, but I wanted to end on a positive note. You know, they both went to jail this year. They both had issues, but they're both making strides to, you know, be better in 2008. Nicole's going to be a mom. Her baby's due any minute. And Paris is acting and doing other things, so hopefully the bad girls in '07 will be good in '08 and I have a feeling we'll have a new crop of bad girls. There will be a lot to write about."

Cell phone precautions you should take