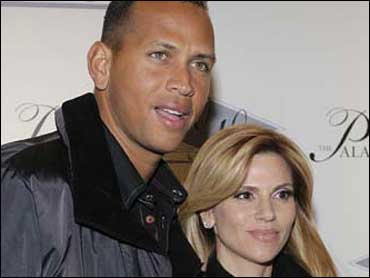 The summer of 2008 is quickly turning into the summer of high-profile celebrity divorces.

According to court documents, Cynthia claims the 12-time all-star's extramarital affairs have left their marriage irretrievably broken and he has abandoned his wife and children. The divorce papers come only days after media reports linked A-Rod to Madonna.

Madonna denied rumors she's getting divorced and in a statement denied her romantic involvement with A-Rod.

While Madonna and Guy Ritchie reportedly are working out their differences, Rodriguez and his estranged wife have joined the multimillionaire divorce club. It could cost him a $12 million estate in Florida and a portion of his record $275 million contract.

At risk for Madonna is an estimated $600 million of unprotected money and a whole lot of attention.

CBS News Legal Analyst Lisa Bloom said that the Rodriguez divorce could get messy - both inside and outside the courtroom.

"Well, there's really two courts here," Bloom told Early Show substitute anchor Lara Spencer. "There's the court of law and the court of public opinion. Cynthia Rodriguez and her attorney surely know that A-Rod's alleged infidelities aren't going to matter in property disputes but it does matter in the court of public opinion. The court will divide the property right down the line. If their prenuptial agreement says otherwise, then it will go according to the prenup."

Bloom says that Cynthia Rodriguez is asking the court to reevaluate the prenuptial agreement.

"They are going to take a hard look to make sure it was entered into fairly," Bloom said. "It looked like she had a month before the marriage to consider it. That part will probably be upheld. Did he disclose all of his assets fairly? Was there fraud or duress? If it was done properly, the court is going to uphold the prenup. That doesn't decide child support. They have a newborn baby and a 3-year-old. The court is going to have to decide how much money she's entitled to if she gets the kids, which she probably will. They're entitled to live the lifestyle their father enjoys which is a very nice lifestyle."

Bloom said that if Madonna and Ritchie do get divorced, the court proceeding will be handled according to British law, which is similar to American law.

Madonna's brother, Christopher Ciccone, will release his book "Life With My Sister Madonna" on July 15. Bloom said that information in the book would not affect a divorce trial, if there is one, although it will play a big role in the British tabloids.