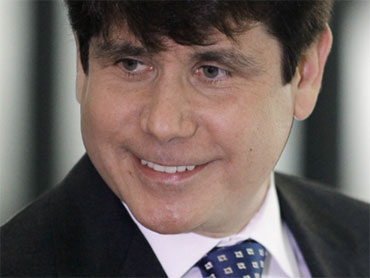 NEW YORK (CBS) Former Illinois Gov. Rod Blagojevich was among the ousted contestants brought back for the season finale of "Celebrity Apprentice."

Blagojevich, who was removed from office after being accused by the U.S. Attorney of corruption and trying to sell the U.S. Senate seat that was being vacated by President Obama, competed on the program with the hopes of raising money and awareness for the Children's Cancer Center in Tampa, Fla.

The technology challenged politician was fired in the fourth episode.

Asked Sunday night by host Donald Trump about his time on the show, Blagojevich said he was grateful for the opportunity to tell the public himself that he was innocent of the charges against hm. He again profusely expressed his innocence.

"Who thinks Rod is guilty," Trump asked the six other former contestants assembled with Blagojevich. Met by silence, Trump persisted. Finally, Olympic sprinter and TV commentator Michael Johnson sheepishly raised his hand, shrugged and then leaned back and shook hands with Blagojevich, who was seated behind him.

The corruption trial of the ex-governor and his brother, Robert, is scheduled to begin June 3 in Chicago.