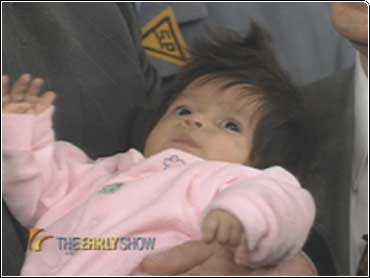 If you happened to spot a swarm of police officers surrounding The Early Show's Mark McEwen recently, it wasn't because anyone was in trouble. They were probably just trying to get a closer look at the baby in his arms.

The baby was Emily Mendoza, who has changed many lives in the space of just a month, and the officers all had a hand in saving her life.

Normally, Joseph Occhipinti, executive director of the National Police Defense Foundation, focuses on informing parents about how fingerprinting can help police locate missing children. But when Emily Mendoza came into his life, all that changed.

Manning a booth at a recent police exhibit in at New York's Jacob Javits Center, Occhipinti was approached by Dr. Norma Otero, who began to cry as she told him of Emily, her 2-1/2-month-old grandchild in Ecuador. Emily was suffering from a heart condition that was inoperable in Ecuador. But, in the U.S., surgery could be performed that would save the baby's life.

"When I heard this story, I just had to get involved," says Occhipinti. "It was close to the holidays and just the kind of story that breaks your heart."

The retired police officer rounded up support within the National Police Defense Foundation (NPDF) and eventually joined forces with the Gift of Life Program to bring Baby Emily to the U.S.

Baby Emily Mendoza received her much-needed heart surgery on Dec. 22 at St. Francis Heart Center Hospital and is expected to fully recover. As a matter of fact, she and her mother, Evelin Mendoza, are preparing for their return to Ecuador. And when they do, Joseph Occhipinti will join them to receive the key to the city of Guayaquil from the town's mayor.

Occhipinti and his colleagues also will be picking up something else: another child in need of special surgery.

A fund has been set up to assist the family as Emily recovers. For more information, call the National Police Defense Foundation at 1-877-325-5437.