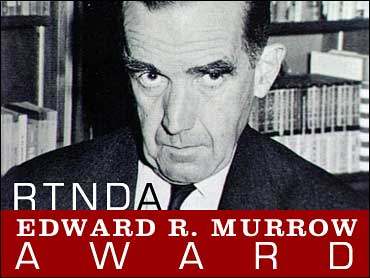 CBSNews.com has been awarded the 2003 Edward R. Murrow Award as the nation's best "TV Network" Web site by the Radio-Television News Director's Association.

"I guess that the house that Murrow built has been re-wired for broadband," said Michael Sims, Director of News and Operations at CBSNews.com. "Murrow defined quality radio and television journalism. We're proud and humbled by the RTNDA's recognition of our efforts to bring quality journalism to the Internet."

The Murrow Award is CBSNews.com's second major journalism prize of the year. In May, the CBS News site won the 2003 EPpy Award for "Best Overall Network TV/Cable Affiliated Internet Service." The EPpy awards are sponsored by Editor & Publisher and MediaWeek magazines

The RTNDA's Murrow awards also honor local television, radio, and online news. For a complete list of winner's click here. The RTNDA has been honoring outstanding achievements in journalism with Edward R. Murrow Awards since 1971.