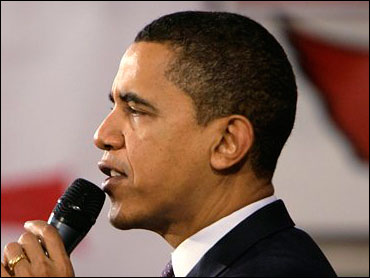 Democratic presidential candidate Barack Obama has opened up a seven-point lead on Hillary Clinton among New Hampshire voters on the eve of that state's primary, according to a new CBS News poll.

By winning the Iowa caucuses, Obama appears to have put questions about his electability to rest for many New Hampshire voters. Forty-two percent in the latest poll said they believe Obama has the best chance of winning the general election, up from just 11 percent in November. In the earlier poll, 72 percent gave Clinton the best chance of winning but 41 percent of those same voters now say so.

And Obama has a large lead among self-described independents, an important block of voters in New Hampshire. Forty-one percent of independents support Obama, compared to just 24 percent who say they are backing Clinton. Clinton maintains a slight lead among Democrats, 33 percent to 30 percent for Obama. More than four in ten likely voters who say they will vote in the Democratic primary are independents.

Both Obama and Clinton are seen as agents of change, a driving theme of the campaign. While 63 percent of respondents said Obama can bring "real change" to Washington, 60 percent said the same for Clinton. But Obama has made headway among New Hampshire voters on the question of experience. Fifty-one percent said Obama is prepared for the presidency, up from 37 percent in the November poll. Eighty-one percent agreed that Clinton is prepared to take over the Oval Office, a number statistically unchanged since the previous survey.

On the Republican side, CBS News reached too small a number of Republican primary voters from the November poll to create a reliable estimate for that race. On the individual level, however, John McCain picked up supporters from other candidates, while Mitt Romney lost some of his November supporters. Mike Huckabee's win in Iowa did not seem to gain him many new voters in New Hampshire.

This poll was conducted by telephone January 5-6, 2008 among registered voters in New Hampshire, first interviewed by CBS News and the New York Times November 9-12th, 2007. CBS News re-interviewed 323 likely Democratic Primary voters for this poll. The error due to sampling for results based on the entire sample of Democratic primary voters could be plus or minus five percentage points. The error on measures of individual change is much smaller.