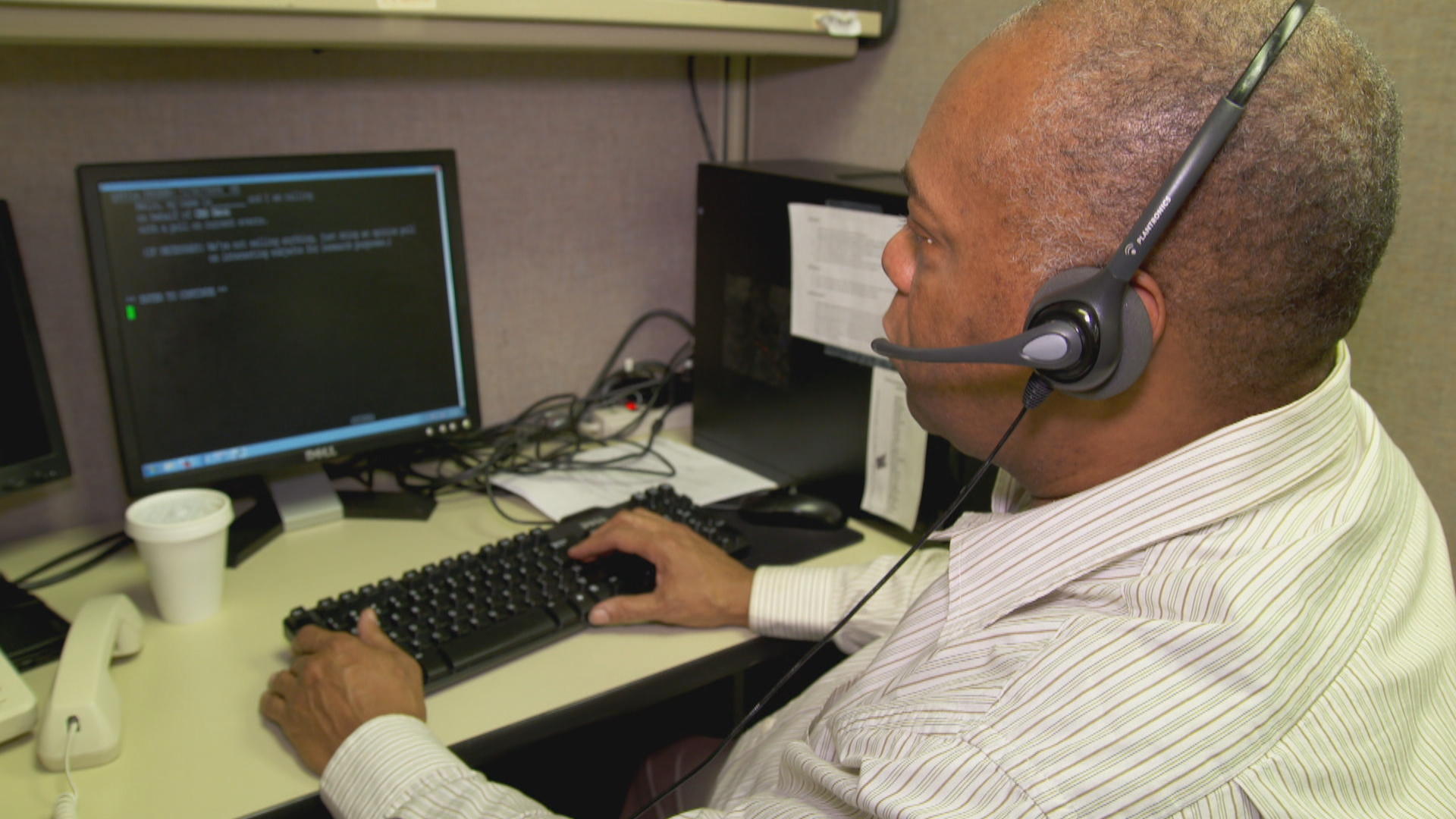 The latest CBS News poll shows Americans are sharply divided about President Trump’s executive order on immigration. Thirty-six percent say the travel ban will make the country “safer from terrorism.” The same number say it will make us “less safe.”

This poll started in Allentown, Pennsylvania. We began calling Wednesday and got the results overnight. In phone rooms just like this one, over 100 interviewers dialed phone numbers randomly to people all over America, reports CBS News elections director Anthony Salvanto.

“Do you think of yourself as liberal, moderate or conservative?” one poll caller asked over the phone.

The phone numbers randomly generated by a computer include both landlines, and these days, mostly cell phones.

Eran Ben-Porath oversees the Allentown phone center that makes the calls for CBS News. So how many numbers do we typically have to dial to do a CBS poll?

“To get 1,000 interviews such as we’re going to get on this poll, we probably need to dial 20,000 numbers,” said Ben-Porath, SSRS’ vice president of public opinion research

Everyone who takes the poll is included in the results. Carol DeVault from Derby, Kansas, is a Trump supporter who took today’s poll.

“When I voted for Donald Trump, it was a matter of hope that things would change, and as far as what he’s doing now, so far I’m in favor of the things he’s been doing,” DeVault said.

We call people from all over the fifty states. The key to a good poll is that it looks like a cross section of America. We call enough people so the poll does that, which statistically happens when we get to around a 1,000 people.

We make sure the poll matches the U.S. census on demographics like age – talking to both the young and the old and everyone in between, on gender – talking to women and men, and the correct proportions by race. This is done so that the poll reflects the statistical makeup of the United States. We talk to Democrats, Republicans and Independents.

Remember all polls have a margin of error. Any number you see, there’s a range around it. If you don’t talk to enough people, that range around any given number starts to get wider.

“We don’t want to add anything to questions even by way of explanation. We never want to skip questions and assume answers,” SSRS senior project director Rebecca Sevem said.

The questions these interviewers are asking are focused on the news of the day. So in the latest poll, it’s the Supreme Court pick and the travel ban.

“Do you approve or disapprove of temporarily banning refugees from entering the United States?” a poll caller could be heard asking.

The goal is for us to word the questions to be unbiased so that people of all different views feel like they have a choice.

“I took the poll last night because I believe that if we’re given the opportunity to express ourselves as Americans that we should do that,” DeVault said.

Polls are not predictions. They’re what people think today. So when you see poll numbers move, remember there are people on the other end of those numbers -- and sometimes people change their mind. If you ever wonder, “Why didn’t they call me?” Odds are we talked to someone just like you, or at least someone who agrees with you.