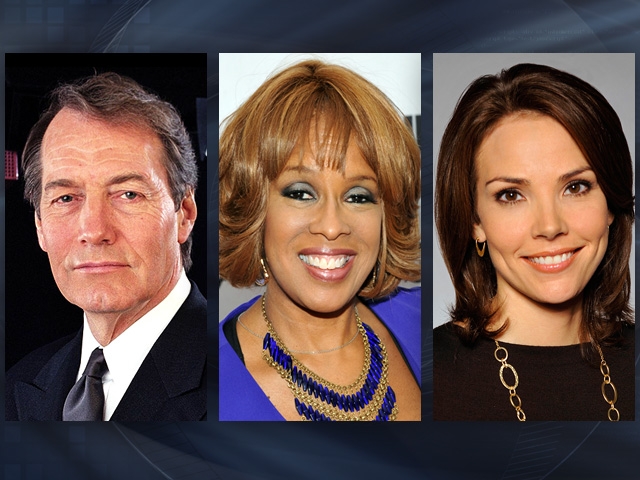 CBS News is getting a new morning show called "CBS This Morning."

The broadcast, which will premiere Monday, Jan. 9, will air from 7:00-9:00 a.m. EST and will be hosted by Charlie Rose, Gayle King and Erica Hill.

"This program represents a new direction for morning television at CBS," said Fager. "We will produce a broadcast that is interesting, compelling and on top of the big stories of the day. It will be lively and engaging and worth your while."

"Charlie, Gayle, and Erica will co-host a bold new broadcast that will bring our original reporting to mornings on CBS," said Rhodes. "We're assembling a tremendous staff off-camera that will make this the best-produced broadcast in television news."

Chris Licht will be Executive Producer of the new broadcast. He will continue as Vice President, Programming overseeing CBS News broadcasts and the development of new opportunities across all platforms.

"I am both exhilarated and humbled to take on this challenge," said Licht. "We have a first-rate team in front of and behind the camera. Our goal is simple: build a broadcast with its own identity that gives viewers something truly different in the morning."

The style, tone, and content of the new morning program will extend CBS News' commitment to original reporting and journalistic integrity.

The broadcast will present a mix of daily news, coverage of developing stories of national and global significance, and interviews with leading figures in politics, business and entertainment.

It will offer morning viewers a more thoughtful, substantive and insightful source of news and information, delivered by a team of experienced journalists.

Rose has hosted his nightly interview program, "Charlie Rose," on PBS since 1991. His guests have included an exceptionally wide range of renowned figures, including politicians, business leaders, scientists, artists and performers. He has drawn attention to areas rarely covered in national television, including the unique influences of classical music, painting, photography, and architecture. He has also served as a correspondent for "60 Minutes II" (1999-2005) and as an occasional correspondent for 60 Minutes.

King has hosted "The Gayle King Show," a live, weekday television interview program on OWN: Oprah Winfrey Network since January 10, promoting discussion of a broad variety of topics that include politics, cultural developments, and news events. She has hosted "The Gayle King Show" on XM Satellite Radio since 2006. In addition, she has served as Editor at large of the award-winning O, The Oprah Magazine since 1999, shaping the magazine's content and message and coordinating the efforts of staff and contributors with the vision of the magazine's Founder and Editorial Director, Oprah Winfrey.

The new morning program will broadcast live from the legendary CBS Broadcast Center in New York City, which has served as the headquarters of CBS News broadcasts for nearly half a century. The building is where television icons including Edward R. Murrow and Walter Cronkite first created original reporting, broadcasting it live to the nation and the world.

The new program's state-of-the-art, high-definition studio will feature cutting-edge digital technologies, and will be located on the ground floor of the CBS Broadcast Center.

In addition, for the first time in its stoic history, the CBS Broadcast Center is getting a facelift with the installation of new floor-to-ceiling windows on 57th Street, one of Manhattan's busiest and most prominent thoroughfares. The windows, a distinctive feature of the newsroom designed for the morning broadcast, will offer the public a first-of-its-kind, behind-the-scenes view of the teamwork and technology involved in broadcasting the news as it unfolds.