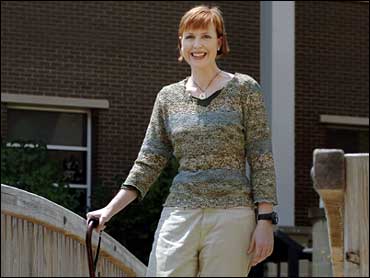 CBS News correspondent Kimberly Dozier, critically wounded in Iraq May 29, was released from Kernan Hospital Wednesday, and will continue her rehabilitation on an outpatient basis.

Dozier was reporting a story on May 29 while embedded with the 4th Infantry Division of the U.S. Army in Baghdad when an explosion killed her camera crew — Britons Paul Douglas and James Brolan — as well as a U.S. soldier and an Iraqi translator.

Dozier was treated at Landstuhl Regional Medical Center in Germany, and on June 7, was transported to the National Naval Medical Center in Bethesda, Md., where she underwent intensive physical therapy. On July 17, she was moved to Kernan Hospital, a state-of-the-art rehabilitation facility that is part of the University of Maryland hospital system.

"Folks, I'm leaving hospitals behind, ahead of the deadline, or at least ahead of schedule. I've had a couple setbacks, and I still face a couple minor surgeries, but overall, the prognosis is far better than the docs had hoped just after I'd reached Germany. The teams at Balad, Landstuhl, and the National Naval Medical Center in Bethesda, Md. worked overtime – something like a dozen surgeries at least, including one that lasted 11 hours," Dozier said in a written statement.

"Just a few weeks later, I'm up on crutches and can even manage with a cane. It's not pretty, but I'm walking on my own – and that, I also owe, to some hard-driving therapists at Kernan Hospital in Maryland, who kept saying, 'Now try this...'"

The next step, Dozier says, is continued outpatient rehabilitation "to get my body used to being in motion full-time."

Dozier attributes the support of friends, family and colleagues to her continued recover. "That, together with all the amazing cards and e-mails from across the country, has really pulled me through. I've told friends it's been like having 10,000 guardian angels on my shoulders," she said in a statement.

She also says she owes her life to the "quick actions of the 4th Infantry Division's Sgt. Daniel Mootoosammy."

"Even with a car bomb cooking off, sending shrapnel through the air just a couple dozen feet from us, Spc. Izzy Flores Jr. just kept calmly speaking to me and working on my legs -- no wavering, no pause," Dozier said.

The three journalists were doing a Memorial Day story about what life is like for the troops in Baghdad when an explosives-packed car blew up nearby.

Douglas, 48, and Brolan, 42, died at the scene of the explosion, which also wounded six U.S. soldiers. The soldier killed has been identified as Army Capt. James Funkhouser, 35, who had been in Iraq only a few months, and leaves behind a wife, Jennifer, and two daughters, Caitlyn and Allison.

"Not a day goes by without thinking of Paul and James -- two of the most remarkable characters I've ever known. My heart goes out to their families, and I know no words to stop their grief. The last I saw Paul and James, they were rushing from their Humvee to 'get the shot' of a young U.S. Army Captain, James Funkhouser, Jr., greeting Iraqi locals at a streetside tea stand. The bomb hit all three of them, together with an Iraqi liaison officer, and took all four lives," Dozier said in a statement Thursday.

"I choose to remember them from the instant before the blast – each one of them consummate pros doing a job they loved to support the families back home they loved even more," she added.