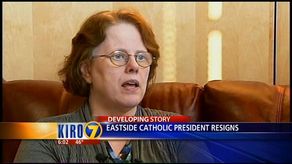 SEATTLE -- The president of a suburban Seattle Catholic school has resigned in the turmoil following the school's decision to force out a vice principal who married his same-sex partner.

Eastside Catholic School trustees have accepted Sister Mary Tracy's resignation, effective immediately. In an email sent to parents, staff and others Tuesday evening, trustees said it was a "difficult but necessary decision" for Tracy.

The school and former Vice Principal Mark Zmuda have disputed the circumstances of his December departure. Zmuda says he was fired, but the school says he resigned after acknowledging that his marriage violated Catholic teaching and thus the terms of his contract.

Tracy was not immediately reachable by phone, and school lawyer Mike Patterson said he had no additional comment.

"Sister Mary came to this decision after much prayer and reflection," the trustees' email said. "For Sister Mary it was a difficult but necessary decision so that a new leader can be brought in to ensure the entire Eastside Catholic community is on a positive path forward."

Tracy is a member of the Sisters of the Holy Names of Jesus and Mary. The school's website says she joined Eastside Catholic in 2010, bringing "more than 35 years of Catholic school leadership."

Interim trustee co-chairmen Tom Padilla and Brad Bastian said they realized that students, teachers, parents and others "may have questions." They announced a parents-only town-hall meeting for Thursday, with additional meetings planned but not yet scheduled.

Just last week, Catholics protesting the departure of Zmuda, a popular teacher and coach as well as vice principal, turned in a petition to both Eastside Catholic and the Catholic Archdiocese of Seattle.

The petitions turned in on Jan. 15 were gathered by Faithful America, a national Christian organization, which called on the archdiocese to reinstate Zmuda.

Another petition started on change.org by the senior class president has gathered more than 30,000 signatures since late December. It wants to change the Catholic Church's stance on gay marriage.

In response to last week's protest, Archbishop J. Peter Sartain said, "The recent personnel decision by the board and administrators of Eastside Catholic regarding Mr. Zmuda was made after a great deal of prayer and consultation. In no way was their goal to be discriminatory to anyone but to be faithful to their mission as a Catholic school."

Archdiocese spokesman Greg Magnoni said Tuesday night that he knew only that Tracy had submitted her resignation. He said Eastside Catholic is a private Catholic school that is not owned by the archdiocese.

Earlier this month, a part-time musical coach at Eastside Catholic who recently announced she is engaged to her same-sex partner said the school gave her a new employment agreement as an independent contractor.

Stephanie Merrow said she was told her marital status doesn't matter. Her contract did not talk about Catholic teachings, she said.

“I feel bad for Sister Mary,” Merrow told KIRO. “My heart is happy for the kids and for Mark. I feel the kids are going to see they can actually make a difference. … They’re organized and they’re thoughtful and they’re pushing for love and acceptance of everyone.”

Merrow said she wanted to go public to support the students who have been protesting on behalf of Zmuda.

Eastside Catholic has about 900 students, mostly in high school.