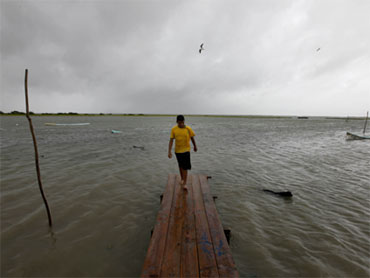 Forecasters say the first Atlantic hurricane of the season has made landfall in northeastern Mexico.

The Category 2 storm churning in the Gulf of Mexico has sustained winds of near 105 mph. The National Hurricane Center says it made landfall about 10 p.m. EDT Wednesday at Soto La Marina along the coast.

The storm is far from the Gulf oil spill, but cleanup vessels were sidelined by the hurricane's ripple effects. Six-foot waves churned up by the hurricane splattered beaches in Louisiana, Alabama and Florida with oil and tar balls.

It is moving west at about 10 mph. It is about 110 miles south of Brownsville, Texas.

At least 50 people were easily persuaded to get aboard buses to shelters, but holdouts could be seen peeking through windows. One man rebuffed the navy's offer and quickly shut his plywood door.

"We're worried it's going to come hard," said Macedonia Villegas as she and her son readied their house before leaving with the marines. Surf pounded the nearby shore, and a lagoon swelled behind her home.

Emergency-preparedness workers also planned to evacuate 2,500 people from coastal areas east of Matamoros, said Civil Protection Director Saul Hernandez, who added that he was most concerned about 13,000 families in low-lying areas where there are few public utilities or city services.

In Texas, there have also been several tornados throughout the day, CBS News Correspondent Don Teague reports from South Padre Island. Officials are concerned about a storm surge predicted to be between 3 and 5 feet.

Most of South Padre Island's residents are riding out the storm, and they will have to stay until the storm is over because the only bridge off the island has been closed, Teague reports.

The storm was far from the Gulf oil spill, but cleanup vessels were sidelined by the hurricane's ripple effects. Six-foot waves churned up by the hurricane splattered beaches in Louisiana, Alabama and Florida with oil and tar balls.

Alex was the first June hurricane in the Atlantic since 1995, according to the National Hurricane Center in Miami, Florida.

Teague reports many businesses and homeowners along the south Texas coast have already boarded up and hunkered down.

"We're just preparing, we're doing the sandbags, you know, making sure everything is safe inside and then we are going to go our separate ways and fix our own houses," coastal resident Sabrina Haecke told CBS News.

Many in the border city braved the growing rains: Commuters struggled to get to work, pedestrians crossed the bridge connecting Matamoros and Brownsville and newspaper hawkers manned the less-flooded intersections.

One flooded stretch of road nearly kept Mari Ponce from getting to her job at the Mundo Shelter, which was preparing for 800 people evacuated from fishing communities along the coast.

"It's not going to hit us (directly), but Matamoros is a place that really floods," she said.

Flash floods also forced hundreds of evacuations in the southern Mexican states of Oaxaca and Guerrero, but hurricane specialist Eric Blake said those rains were only indirectly related to Alex and possibly the residual effects of Hurricane Darby, which has dissipated in the Pacific.

Three people, including a 5-year-old child, were killed when heavy rains and winds brought down a wall over their wooden house in Acapulco, state Civil Protection authorities said.

Texas also watched Alex's outer bands warily. Alex was expected to bring torrential rains to a Rio Grande delta region that is ill suited - economically and geographically - to handle it.

Texas residents had been preparing for the storm for days, readying their homes and businesses and stocking up on household essentials. But concerns eased as the storm headed farther south toward Mexico.

Engineers were watching the levees in south Texas as the storm approached the area.

On nearby South Padre Island, the mood was less anxious. Although hotels and restaurants looked deserted compared to the crush of vacationers who normally pack the popular vacation spot in the summer, those who stuck around didn't size up Alex as much of a threat.

One couple renewed their wedding vows on the beach as a few campers reluctantly moved their trailers out of the park hours before a mandatory evacuation deadline.

"It's June. It's too soon for hurricanes," said Gloria Santos, of Edinburgh, after hitching her trailer back to her truck.

Jerry Wilson, 50, also didn't think much of Alex, though he struggled in the fierce gusts to hoist a cloth-tipped pole to clean high-mounted cameras across the island that will let Internet viewers watch Alex's arrival live online.

"We got two generators and lots of guns and ammo, so we're not worried about it," Wilson said.

Scientists in Texas were also monitoring a buoy system that records the Gulf's water directions and velocity every half-hour. That information will determine where the oil could spread, should it approach Texas as tar balls on the beach, said Texas land commissioner Jerry Patterson.

Oil rigs and platforms in the path of the storm's outer bands were evacuated, and President Obama issued a pre-emptive federal disaster declaration for southern Texas counties late Tuesday. 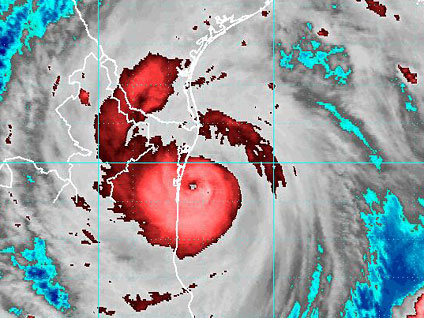 (NOAA)
The three oil rigs and 28 platforms evacuated are not part of the Gulf oil spill response.

In Louisiana, the storm pushed an oil patch toward Grand Isle and uninhabited Elmer's Island, dumping tar balls as big as apples on the beach. Cleanup workers were kept at bay by pouring rain and lightning that zigzagged across the dark sky. Boom lining the beach had been tossed about, and it couldn't be put back in place until the weather cleared.

"The sad thing is that it's been about three weeks since we had any big oil come in here," marine science technician Michael Malone said. "With this weather, we lost all the progress we made."

The National Weather Service said a hurricane warning was in effect Tuesday for Cameron, Willacy and Kenedy counties. The coastal warning covered Baffin Bay and 100 miles south to the mouth of the Rio Grande.