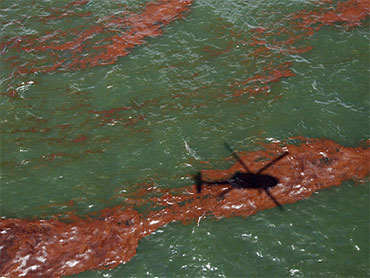 BP and the Coast Guard sent oil-scooping skimming ships in the Gulf of Mexico back to shore Tuesday because nasty weather from Tropical Storm Alex churned up rough seas and powerful winds.

French said workers were using the time off the water to replenish supplies and perform maintenance work on equipment.

"We're ready to go as soon as conditions allow us to get those people back out and fighting this oil spill," French said.

Although , its outer edges were causing problems out in the Gulf.

The loss of skimming work, combined with 25 mph gusts driving water into the coast, has left beaches especially vulnerable.

In Alabama, the normally white beaches were streaked with long lines of oil, and tar balls collected on the sand. One swath of beach 40 feet wide was stained brown and mottled with globs of oil matted together.

Wayne Hebert, who helps manage skimming operations for BP, said all nearshore skimmers were idled off the coasts of Florida, Alabama and Mississippi.

"Everyone is in because of weather, whether it's thunderstorms or (high) seas," Hebert said.

Waves were as high as 12 feet Tuesday in some parts of the Gulf.

The Coast Guard had to evacuate workers and equipment from coastal areas in Terrebonne Parish because of tidal surges that could cause flooding, French said.

The only vessels left in the water are being used to capture or burn oil and gas leaking from the well and to drill relief wells that officials say are the best hope for stopping the leak for good.

Ten boats that had been removing oil from the coast of Alabama sought shelter in the protected waters of Mobile Bay or Perdido Bay, and a flotilla of vessels that had been trying to prevent oil from entering the pass into Perdido Bay were gone. In Mississippi, four skimmers were riding out the storm beside Petit Bois Island, Hebert said.

Cleanup crews fought the winds and showers with empty bags blowing across the sand occasionally and the tops of canvas shelters flapping in the breeze.

Hebert said it was impossible to say when the work might resume.

"I don't control the weather," he said.

But the rough weather also might give nature a hand in breaking down crude from the massive oil spill.

Waves churned up by Tropical Storm Alex could help break up the patches of oil scattered across the sea, and the higher-than-normal winds that radiate far from the storm could help the crude evaporate faster. Forecasters said Monday they didn't expect the center of Alex, which is expected to reach hurricane status Tuesday, to pass near the site of BP's leaking well.

"The oil isn't in one solid sheet. It's all broken up into patches anyway. It will actually work to break those patches down," said Piers Chapman, chairman of the oceanography department at Texas A&M University.

Floating oil-containment booms also could be rendered useless by waves slopping over them and may have to be pulled out of the water.

Pulling boats and crews off the water could cost precious time, said Nancy Kinner, co-director of the Coastal Response Research Center at the University of New Hampshire. Equipment has to be stripped down, packed and protected from the force of the storm, and then has to be reassembled and deployed again, she said.

Even 12-foot waves aren't enough to stop the tanker that is sucking up large quantities of oil through the cap on the well, or a second vessel that is burning off hundreds of thousands of gallons at the surface, Allen said.

Louisiana Gov. Bobby Jindal said Monday that the weather could push the oil farther into the ecologically delicate Barataria Bay, home to a diverse group of wildlife.

Other officials echoed that worry. Rough seas already have forced barges to leave their posts as a barrier against the oil near the bay.

"We've already lost over 68 days of decent weather and this is going to be an active hurricane season," Jefferson Parish Council Chairman John Young said Monday. "They're going to start coming yet there continues to be a lack of a sense of urgency."

The uncertainty of what Alex and other storms could do to BP's containment effort gave new urgency to the company's efforts to make its operations at the well as hurricane-resistant as possible.

The company said it hopes to install a new oil-capturing system by next week that will allow it to disconnect the equipment faster if a hurricane threatens and hook it back up quickly after the storm passes. Right now, BP would need five days to pull out if there were a hurricane. The new system being developed, which uses a flexible hose, would cut that to two days.

The containment system now in place is capturing nearly 1 million gallons per day from the well, which is spewing as much as 2.5 million gallons a day, according to the government's worst-case estimate.

In other developments, BP said in a filing with the Securities and Exchange Commission that the catastrophe has cost it $2.65 billion so far. The oil giant has also said it would set up a $20 billion fund to compensate people and businesses for their losses. BP has lost more than $100 billion in market value since the deep-water drilling platform it was operating blew up April 20, killing 11 workers.