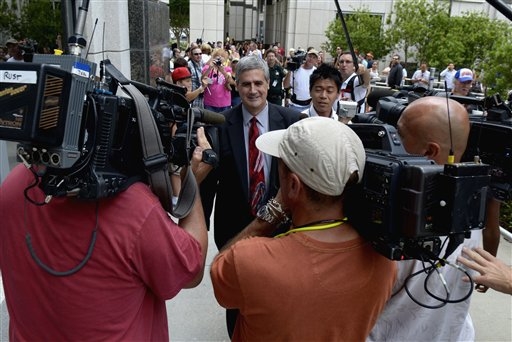 Immediately after Casey Anthony was acquitted on charges she killed her two-year-old daughter, Caylee Anthony, Casey's defense attorney chided the media for presuming guilt long before the case ever went to trial.

And CBS News legal consultant Jack Ford says this was hardly the first time media coverage of a trial reached a fever pitch -- and only the latest example of justice as entertainment.

He notes that, as they had every day for the past six weeks, anxious crowds gathered outside the Orlando courthouse Tuesday morning, hoping to get in to catch a glimpse of one of the most captivating trials in recent memory.

"Once again, it was relentless media coverage that in large part fed the fascination with the case," Ford observed.

And just minutes after the not guilty verdict, defense attorney Jose Baez took a swing at the media, saying, "We have the greatest Constitution in the world, and if the media and other members of the public do not respect it, it will become meaningless."

It is, says Ford, a familiar charge, and one with a long history.

In 1935, the nation followed newsreel coverage of the first so-called "trial of the century," when a German immigrant was accused of kidnapping and murdering aviation hero Charles Lindbergh's infant son.

Media coverage was so excessive that cameras were subsequently banned from most U.S. courtrooms for decades after.

Sixty years later, it was newly-created cable news networks, hungry for compelling content, that drove coverage of the murder trial of O.J. Simpson to unprecedented levels and created a new market for celebrity courtroom drama..

In 2005, Michael Jackson was charged with child molestation. Although eventually found not guilty, the high-profile trial derailed his career for years.

And experts say the presumption of guilt is a hallmark of these media trials.

But, CBS News legal analyst Lisa Bloom says, the Anthony case had one critical difference from earlier media-heavy trials: "no celebrities. There's just an ordinary little girl who was found dead, and mother who is accused of her killing."

Still, says Ford, whatever the circumstances, the public's appetite for these types of cases, fed by ever-expanding media coverage, should only continue to grow.

Ford and criminologist Casey Jordan discussed the verdict, the hoopla surrounding the case, and the media members who covered it with "Early Show" co-anchors Chris Wragge and Erica Hill: