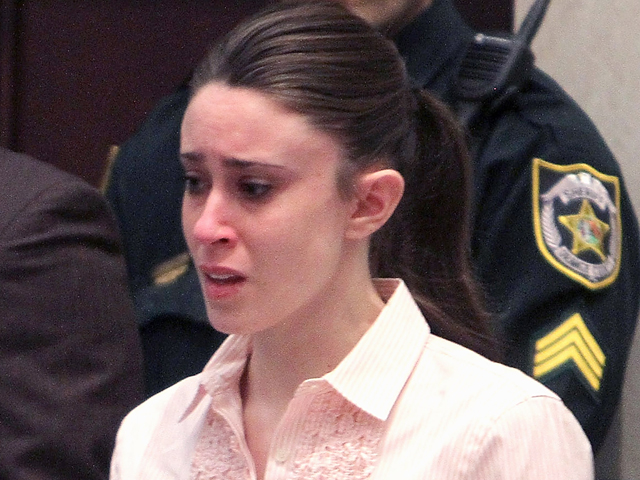 One of the jurors who acquitted Casey Anthony on charges of murdering her daughter, Caylee, says he wishes the panel could have found her guilty.

Anthony, 25, of Orlando, was found not guilty of first-degree murder, aggravated child abuse and aggravated manslaughter in Caylee's death, but guilty of four lesser charges of providing false information to a law enforcement officer.

"I just swear to God... "the juror told the St. Petersburg Times in an exclusive interview as he was, the paper says, overcome by tears."I wish we had more evidence to put her away.

The man, known publicly only as Juror No. 2, and whom the Times says wanted his name withheld to keep himself and his family from media and public scrutiny, told the newspaper, "Everybody agreed, if we were going fully on feelings and emotions, she was done."

But the dozen jurors from Florida's Pinellas County - the Tampa Bay area - knew they couldn't go on emotions and feelings, he said.

"We just wanted to go on the evidence that was presented to us," he said.

And, he explained, there simply weren't enough pieces to convict Anthony.

He says it wasn't an easy decision. But in the end, he said, it was the only decision they could make based on the evidence.

Another juror, 32-year-old nursing student Jennifer Ford, who'd been known as No. 3, expressed similar thoughts to ABC News, saying in a portion of the interview aired Wednesday night, "If you're gonna charge someone with murder, don't you have to know how they killed someone or why they might have killed someone or have something where, when, why, how? Those are important questions. They were not answered."

She added, "In our country ... we have to prove it. You can't just be like, 'Yeah that really looks bad. Smells bad. Looks bad.' I get that. It does:smells bad, looks bad. I get that. But it's someone else's life, and if I'm wrong, and I kill someone else? I can't live with that."

Ford is quoted as saying jurors declined to talk with reporters immediately after Tuesday's verdict because, "We were sick to our stomach to get that verdict.

"We were crying and not just the women. It was emotional and we weren't ready."

Ford said the case was troubling.

"I did not say she was innocent," she said. "I just said here was not enough evidence. If you cannot prove what the crime was, you cannot determine what the punishment should be."

The prosecution didn't paint a clear enough picture of what happened to Caylee, Ford argued in the part of the interview broadcast Wednesday night.

"I have no idea what happened to that child.' Ford said.

Ford acknowledged that Casey's behavior in the weeks after her daughter went missing, including partying, "looks very bad...but bad behavior is not enough to prove a crime."

"I feel she had something to do with it," Ford said of Anthony. "I don't believe it's fair to speculate."