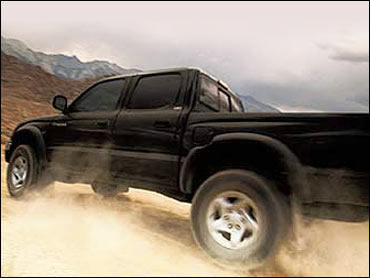 Just 17 of 52 sedans, compact cars and other vehicles tested received the government's highest rating for their ability to avoid rollovers, according to results released Monday.

The 2003 Toyota Tacoma pickup with an extended cab got the worst rollover rating of the vehicles tested, earning two stars on the National Highway Traffic Safety Administration's five-star scale.

The Audi TT, Buick LeSabre, Chrysler Concorde, Dodge Intrepid, Ford Mustang and Mercedes-Benz E320 were among those earning five stars. Most vehicles received four stars, including the Acura RL, the Buick Century and Park Avenue, the Chevrolet Cavalier, the Honda Accord and Civic and the Volkswagen New Beetle.

In those tests, the BMW 3-series and the Mazda 6 did worst, earning three stars for injuries caused to the driver in a side-impact crash. Three stars reflects an 11 percent to 20 percent chance of serious injury in a crash.

NHTSA noted that the damage caused to the crash test dummy in the BMW crash indicated a high likelihood of serious pelvic injury in an actual crash.

The Kia Sorento, Mercedes-Benz C240 and the Volvo XC90 were the only three vehicles to earn five stars in both the driver and rear passenger side-impact tests. Five stars means a vehicle has a risk of serious injury of 5 percent or less.

Automakers have been critical of NHTSA's rollover tests, since the agency uses a mathematical formula instead of a moving test to predict rollover. NHTSA stands by the test as a good predictor of vehicle behavior. But the agency also plans to adopt a moving test later this year that will measure the way a vehicle negotiates sharp turns.