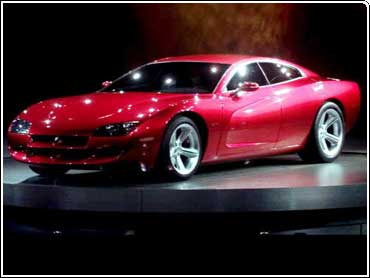 The turn of the century has us all thinking about the future. For instance, what will you be driving in the new millennium?

CBS News Consumer Correspondent Herb Weisbaum went behind the wheel of some of tomorrow's cars.

The cool-looking concept car is the Dodge Charger R/T. And it gives you an idea of where designers are headed.

It's a four-door sports coupe. Chrysler says aging baby boomers are turning away from models with only two doors. And it runs on clean-burning natural gas.

When the world's automakers roll out their hottest new cars and concept vehicles, it's the styling that catches your eye, swoopy designs that say the future is here or at least just around the corner.

But the truth is that the really exciting developments lie beneath the shiny sheet metal, where cutting-edge technology will make the car of tomorrow safer and more fuel-efficient.

"I have never seen a time where there is the potential for doing more great things in cars and trucks than we see right now," declares the University of Michigan's Dave Cole, who studies the auto industry.

To come up with the cars and features buyers will want in the new millennium, designers are using everything from a state-of-the art virtual wind tunnel to good old seat-of-the-pants engineering.

Count on this: Your next new car will be a whole lot smarter, packed with even more onboard computers, from an adaptive cruise control that senses traffic ahead and automatically slows you down to active suspension systems that can feel and instantly smooth out bumps.

And yes, in the future, you'll talk to your car. And your car will talk back, in your choice of male or female voice.

It all seems perfectly natural to Ford engineer Mark McCarthy: "People talk to other people. Why not talk to your car?"

Voice-activated controls will let you interact with your car while keeping your hands on the wheel and eyes on the road.

University of Michigan professor Cole says the one thing most of us won't be buying anytime soon is an electric car. Once viewed as the clean car of the future, the limited range and long charging time have all but killed electrics.

"There are a few people that are interested in them, and they meet a few people's needs, but not very many," Cole says.

Instead automakers are turning their attention to hybrids - cars running on both gasoline and electricity.

Honda's Insight just went on sale. This lightweight, extremely aerodynamic car is powered by a tiny three-cylinder gas engine that gets an assist when needed from an even tinier electric motor.

Other automakers are also working on hybrids. Toyota's Prius is scheduled to go on sale sometime this summer. And the few who've driven it already seem impressed.

Someday soon, you'll be able to stay in touch with your car wherever it is via the Internet - to find out when it needs service and to tell it what sort of information yowant on the ride to and from work.

Some of this gee-whiz technology is already starting to show up in a few high-end cars. One of the most impressive new gadgets: Cadillac's night vision.

The system uses a grill-mounted infrared camera that sees heat instead of light and projects a heads-up display on the windshield.

Night vision lets you see three to five times farther than low beams. Cadillac's Ed Zellner says seeing that extra image on the windshield is not a distraction.

You use a rearview mirror without a second thought. And once you've driven night vision for a while, you have the same sensation.

This year night vision is only available on the Cadillac Deville. But like air bags and other new technologies, it will likely trickle down to more affordable cars over the next few years.