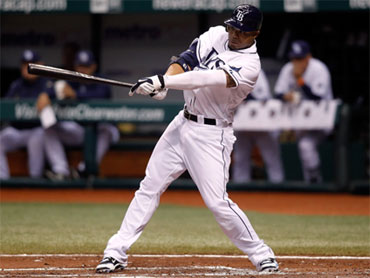 This story originally appeared on CBSSports.com. It was written by Scott Miller


The Boston Red Sox struck again in a stunning late night move Wednesday, agreeing to terms with free agent outfielder Carl Crawford on a seven-year, $142 million contract. The deal is contingent on Crawford passing a physical exam, which is scheduled to happen on Thursday.

The move is the second monumental deal in a week for the Red Sox, who acquired slugging first baseman Adrian Gonzalez from San Diego last weekend.

The reaction in the lobby at the Swan and Dolphin Resort here in the minutes before midnight as news of the Red Sox/Crawford deal broke was one of pure shock.

And, it should have been. Nobody, not even the hundreds of trained baseball professionals gathered here at the winter meetings, saw this one coming.

The Red Sox, spending so much money over the past six days that it would have made the late George Steinbrenner blush, have added two of the game's premier offensive stars, each of whom owns Gold Gloves and together add a perfect blend of speed and power.

This to a lineup that already ranked second in the American League in runs scored last year, and though the Sox already had lost Victor Martinez (Detroit) and Adrian Beltre (free agent), Crawford and Gonzalez, on paper at least, make Boston even more dangerous.

The Red Sox's moves not only are enough to give the Yankees acid reflux, it makes it imperative that New York close a deal with free agent ace left-hander Cliff Lee.

Crawford, 29, becomes the second-highest paid outfielder in the history of major-league baseball, behind another Boston outfielder -- Manny Ramirez, who signed an eight-year, $160 million deal before the 2001 season. But the average annual value of Crawford's deal -- $20.28 million -- surpasses Ramirez's $20 million.

Which is an absolutely jaw-dropping feat, given that Crawford never has had a 20-homer season.

Meantime, not only have the Red Sox struck a mighty blow against the hated Yankees, they put a major hurt on the Los Angeles Angels, who were considered heavy favorites to sign the outfielder who became a free agent this winter after a long run with the Tampa Bay Rays.

"Congratulations to him. He deserves it."

Crawford last season led the American League with 13 triples and was fourth in the league with 110 runs scored. A four-time All-Star, in 154 games for the Rays, Crawford batted .307 with 19 home runs, 90 RBIs and 47 steals.

He has led the AL in steals four times, and his 105 triples lead all active major leaguers.

Crawford and Gonzalez together will give manager Terry Francona two more huge weapons to deploy in a lineup that already includes Dustin Pedroia, Kevin Youkilis and an aging -- but still dangerous -- David Ortiz.

Some in the industry were sure that the Red Sox would veer in a direction other than Crawford after they acquired Gonzalez over the weekend.

Though a 48-hour negotiating window the Red Sox had with Gonzalez expired on Sunday without a contract extension, word here at the winter meetings is that Gonzalez and the Sox have agreed on the framework of a multi-year deal that will be announced sometime after Opening Day 2011. That way, the Sox can delay the millions they will owe in luxury tax until 2012.

The parameters of the Sox/Gonzalez deal are seven years at $154 million, according to sources with knowledge of the discussions. Combined, the Red Sox in the past six days have committed a total of $302 million to Crawford and Gonzalez.

"They have made some serious improvements," Yankees general manager Brian Cashman told the YES Network's Jack Curry late Wednesday night. "They are going to make it tough on us."

Because of the Gonzalez deal, many in the industry had handicapped the Angels as the clear favorites to land Crawford, though Jayson Werth's seven-year, $126 million deal with the Washington Nationals figured to extend the Crawford negotiating process.

However, a source close to Crawford said earlier Wednesday that he was getting antsy to sign and remove the uncertainty from his future. And late Wednesday night, he certainly did that.

The Angels are believed to have offered Crawford a six-year deal for somewhere in the $105- to $110-million range. Yankees general manager Brian Cashman had dinner with Crawford and his representatives earlier this week, but the Yankees have been concentrating on ace pitcher Cliff Lee and it is not believed that they made an offer to Crawford.

Texas also had made contact with Crawford, a move some were watching given the fact that Crawford is from Houston and lives there during the offseason. But the Rangers, like the Yankees, are primarily focused right now on Lee.

The move is another crushing winter blow to the Angels, who were out-bid on both Mark Teixeira and Sabathia by the Yankees before the 2009 season.

Now, they lose Crawford -- a player they were supremely confident would gravitate their way -- to the Red Sox.

And the real question now becomes, even at this early stage of the winter, whether anybody can keep pace with the Red Sox in 2011.

That, or who in the world the Red Sox are going to land next.