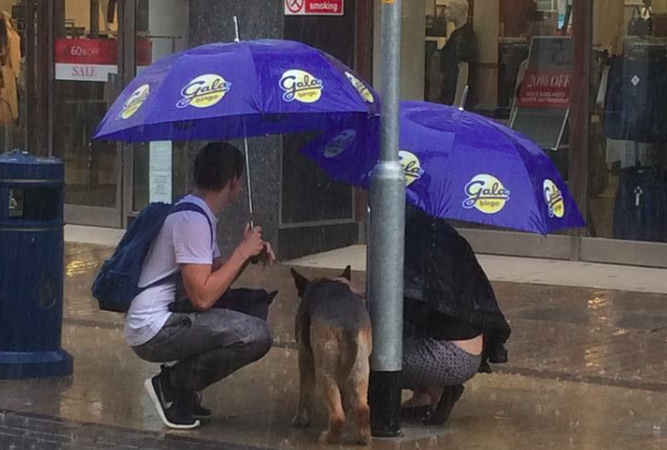 People often take pity on a panting dog in a car on a hot summer day.

But what happens if a dog is left outside in torrential downpour?

On Monday, staff members at Gala Bingo Dover found an unusual answer to that question as they looked outside their Biggin Street window in Dover, England.

They saw a couple stop to shelter a shivering dog tied to a lamppost in the pouring rain.

The Good Samaritans took off their rain gear to cover the German Shepherd-like dog to keep him dry in an act of kindness that touched thousands of people.

"When the dog was first tied to the lamppost it was overcast but then all of a sudden the heavens opened with torrential rainfall," Ricky Cook, host at Gala Bingo Dover, described to CBS News. "It was a selfless act that they were willing to get soaked to protect the dog."

The gesture was so inspiring, assistant manager Jon Sparkes decided to help.

He grabbed some umbrellas from the back, walked outside and handed the couple two large blue umbrellas.

The pair stayed with the dog for about 20 minutes until the owner returned.

When the male owner came out of a shop and saw the couple shielding his damp dog, he was "elated," Cook said.

As the owner walked away, the couple turned into Gala Bingo Dover to return their umbrellas.

"I told them they could keep them -- as they had earned them," Cook said.

The bingo club shared the story of the "two kind-hearted individuals" on its Facebook page.

More than 1,000 people liked the post and dozens commented, praising the animal lovers.

"It warms the cockles of your heart to see such wonderful unselfish people in this very often cruel world," one user commented.

We "just wanted to show there are good people out there," he said.