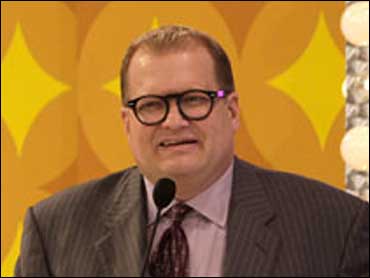 Bob Barker had his cause. He signed off every "Price is Right" by saying: "help control the pet population, have your pet spayed or neutered."

Now the new host of "The Price is Right," Drew Carey, has found a cause to call his own and it's a little more controversial than fixing your pets.

Carey expressed his support for medical marijuana in a video made for the Reason Foundation, a nonprofit organization that promotes libertarian principles.

"Ah, smell that smell? It's the smell of freedom," he said on the video "Here I am in the backroom of the pharmacy, the medical marijuana dispensary, as you can see it's like a deli. It's all really out in the open, you can see what you're getting, and pay for it with your credit card."

Under California law, people who suffer debilitating ailments ranging from chronic back pain to cancer are permitted to smoke pot provided they have a prescription from a physician.

Carey doesn't smoke pot in the video and media critics say he doesn't have to worry about his career going up in smoke.

"Most of the audience sort of believes that most of the entertainers are a little bit out there and wacky anyway, the fact that he's advocating medical marijuana is actually a fairly reasonable stance that people in the medical community would be in favor of," Early Show entertainment contributor and People assistant managing editor Jess Cagle said.

CBS and Fremantle Media, which produce "The Price is Right," declined to comment about the video.

"For example, in 1999, the Institute of Medicine said, hey, listen, marijuana can be used to help people who have nausea and vomiting, which is a side effect of chemotherapy with cancer, people who have AIDS, a wasting disease, since it does stimulate appetite," he told Early Show co-anchor Julie Chen. "It's really helpful for them. And then the FDA says, hey, listen, we've seen all these studies and we don't believe that it helps in any way at all."

Currently, medical marijuana is legal in 12 states and 300,000 people are using it for medicinal purposes, Guardine said. He said it is very easy, perhaps too easy, for a person to get a medical marijuana prescription because the doctor will believe everything he says.

"So if you're saying you're having back problems or if you're having some nausea or what have you, you can get the prescription, go into one of these places and get your marijuana for medicinal purposes," he said.

But Carey is certain that he is championing an important cause.

"I think it's clear by now that the federal government needs to reclassify marijuana," he said in the video. "People that need it, should be able to get it, safely and easily."