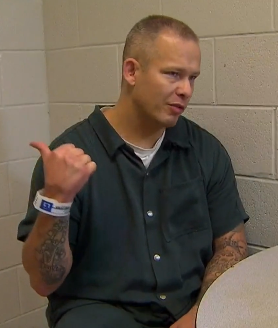 Thousands of viewers have watched videos Allen Police posted on YouTube showing Michael Durden giving advice on how to protect personal property. Now he says he wants to help homeowners scare away thieves.

It isn't just curious homeowners taking notice of Durden's YouTube videos on how to prevent burglaries. Some of his fellow inmates have also heard about the professional burglar's newfound fame.

"I'm probably fixing to have to get locked away in a single cell, protective custody because I've already had problems just yesterday from being broadcast on Channel 11 News for the YouTube video," Durden said from an interview room at the Collin County Jail.

But Durden said he doesn't regret going public. What he does regret, he said, is the pain he's caused his victims, remorse which he said comes as the result of getting sober in jail. That is why, he told the station, he's teaching people to protect themselves.

For example, Darden says that "the little cameras that people have that you can put at the very front of your house, some of them put them up in the corners where they point down, change that. Bring that camera down to almost average height."

He said that will capture better footage of a suspect's features and will also send a message that the home is protected.

"The little sticker that people have that says that their alarm system is current, and that they have a permit for it is a major deterrent to a lot of people," Durden said.

Whenever a home presented multiple levels of difficulty, Durden said he would simply move on because there were always plenty of easier targets.

"... I hope that some of the people that I hurt in the situation can find... I don't know, solace in the fact that, you know, I realize what I did, and I'm sorry for it," Durden said.

Both Durden and police insist he was not promised any leniency for sharing his secrets.