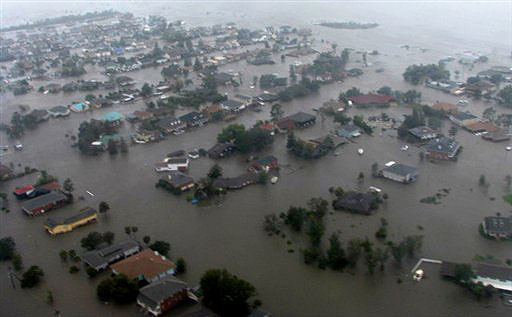 New Orleans, Miami, Boston, Long Beach, Calif. and other coastal U.S. cities are doomed to be washed away by ever-rising sea levels, according to findings from a new study published in the Proceedings of the National Academy of Sciences.

"Some cities appear to be already lost," study lead author Benjamin Strauss told CBS News. "For New Orleans, there are levees, it's possible to build levees higher and stronger for some time, but that's not necessarily safe or sustainable in the long run. We've already seen what can happen when levees break, when the sea level gets higher, the bigger the tragedy can be."

If carbon emissions are not put in check by the year 2100, the sea level could increase at least 14 feet. That would impact about 20 million people who live along the country's coast, Strauss' research found. In danger are as many as 1,800 municipalities, including 21 cities with more than 100,000 residents each.

Strauss calculated the "lock-in date" for these cities, or the year by which the accumulation of carbon emissions essentially seals a city's fate of sea level increases that would eventually submerge land containing more than half their populations.

Hollywood, Florida has a lock-in date of 2025. New York City has until 2095. New Orleans and Miami are already past the point of no return.

For cities such as New York, Wilmington, N.C., and Bridgeport, Conn., which have more distant lock-in dates, there's still hope of keeping the streets from final inundation. The study posits that "aggressive carbon cuts," in more than half of the threatened areas could forestall the decimating impact of coastal flooding, as long as the West Antarctic ice sheet, an important contributor to sea level rise, remains stable.

Recent research suggests that is an optimistic assumption. A study out Monday in Nature Geoscience found that Antarctic ice shelves, which have a "door-stop effect" on ice sheets, slowing the flow of melt into oceans, are in danger of continent-wide collapse by 2100, if emissions are not curbed by midcentury.

That study painted a much different picture, however, if emissions slow significantly, and the same lesson applies for the U.S. cities implicated in Strauss' research.

Though the issue of lowering emissions is largely one of climate policy, Strauss stressed that data from these kinds of studies should offer a wake-up call to alter ways people consume energy resources today.

"In the long run, each gallon (of gasoline) we burn eventually ads 400 gallons of water to the ocean," he asserted.

He added that, while the U.S. has about less than five percent of the global low-lying coastal population, it has more resources and money to invest in combating climate change than many other nations.

"We have a lot of resources, a lot of money compared to most places at risk, I think we have an opportunity to invest, to find an economic opportunity and reduce the pain of loss," Strauss said. "We can pioneer those kinds of measures that could become an expertise we could export to the world. It could be a service."