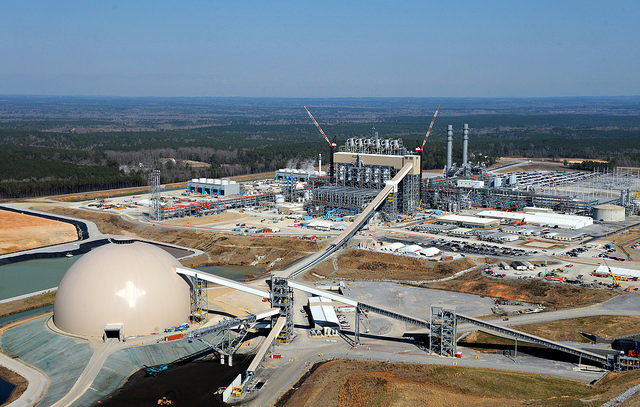 A potential turning point in the fight against global warming could come later this year near Meridian, Mississippi.

That's where a coal-fired power plant owned by Southern Co.'s Mississippi Power will open, equipped with a proprietary system designed to capture carbon emissions before they're emitted into the atmosphere.

Known as the Kemper Project, it's one of the country's largest roll-outs so far of technology that advocates say could be instrumental in combating greenhouse gases, which scientists have shown are driving up Earth's temperature to alarmingly high levels.

Designers say the Kemper plant will take the 3.5 million tons of carbon dioxide it expects to emit annually and inject it into oil and natural gas wells, making those resources easier to extract. In the process of injecting the carbon dioxide, some of it comes back up but is reinjected into the ground. Eventually, virtually all the carbon dioxide is permanently stored.

Getting the project, one of more than a dozen carbon-capture tests underway around the U.S., off the ground has been a struggle. The plant cost $6.4 billion, more than double initial projections, and is two years behind schedule. The delays have proven costly. Atlanta-based Southern, which owns utilities that serve 4.4 million customers, had to repay $133 million to the federal government because it missed an April 2014 deadline to put the plant into operation.

"The cause of these cost increases and time delays are due to a number of (reasons), including regulatory issues, miscalculating pipe thickness, length, quantity, and metallurgy," according to an analysis by the Massachusetts Institute of Technology. "After these changes to the pipes were made, additional changes needed to be done to the support structures."

Southern wanted to make sure Kemper was done right and noted that delays were expected for a"first-of-its kind project," according to spokesman Jeff Shepard.

"We do not take the schedule at Kemper lightly," he said. "However, we are focused not on dates, but on quality and safety, two key aspects of our service expected by our customers."

"The record low prices for oil don't make things easier for (carbon-capture) technologies," said Dominique Kronenberg, chief operating officer of Swiss-based Climeworks, which is developing an alternative system for capturing carbon. "However, there's still interest in R&D and pilot projects in this field, and we believe that in the mid-term this will get better again and that there is a market for renewable and sustainable fuels even if the price is slightly higher than for fossil fuels."

During the recent Paris Climate Talks, 195 countries committed to keeping the rise in global temperatures "well below" 2 degrees Celsius (3.6 degrees Fahrenheit), a level that scientists say could lead to catastrophic outcomes for the global climate.

The International Energy Agency noted in a 2015 report that in order to meet that goal, the amount of carbon that's being stored will need to increase by "an order of magnitude." Since 2005, spending on large-scale carbon-capture technology has reached $12 billion. Along with deployment at power plants, carbon capture is also being used at fertilizer, natural gas, ethanol and other industrial sites.

"It comes down to financing," said Howard Herzog, program director of MIT's Carbon Capture & Sequestration Technologies Initiative. "The markets are just not developing."

Capturing carbon before it ascends into the heavens can be done in various ways. Climeworks, for instance, is trying to extract the carbon directly from the air.

But backers of the technology have faced setbacks. The U.K. government last fall pulled the plug on a 1 billion pound carbon-capture competition six months before it was scheduled to be awarded. A U.K. trade group called the decision "devastating."

And more than a dozen projects have been canceled in the U.S. and Canada, according to a database maintained by MIT.