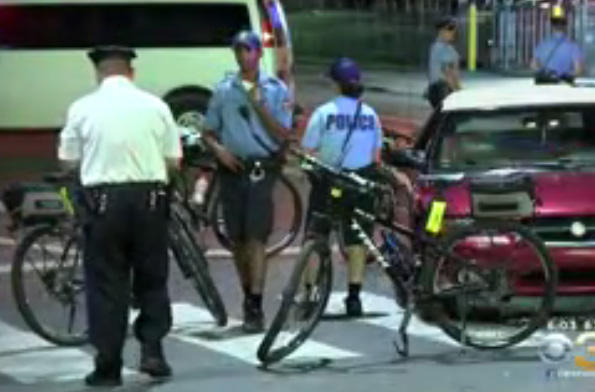 Police have yet to determine whether it was intentional.

It started just after 2:30 a.m., when officers on bikes and in a patrol car stopped a red Chrysler Sebring convertible at an intersection. It had just been reported stolen in a carjacking.

Officers arrested two men and recovered a gun they said was linked to the carjacking. One officer broke his hand during those arrests.

While officers were on scene, police say, a black Nissan squeezed between the convertible and the police cruiser, damaging the cruiser and mangling three police bikes.

Capt. Drew Techner said the car was going as fast as 60 miles per hour.

"It amazes me how, police are out here, doing the job in the middle of the night, providing public safety to all Philadelphians and this has to happen, where somebody has complete disregard to the safety of police officers trying to provide protection to the city," Techner remarked to CBS Philly.

Police are looking for a black Nissan with dark-tinted windows, possibly an Altima with some scratches and dents.

Investigators are hoping surveillance video from several businesses at the intersection will help identify the car and driver.