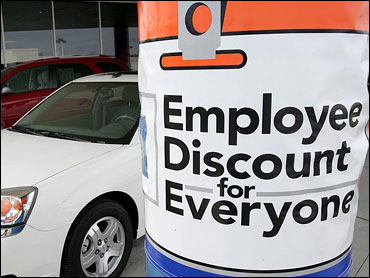 Attractive sales incentives at auto dealerships sent retail sales up in July despite lackluster demand at department stores and a number of other retail establishments.

The Commerce Department reported Thursday that total retail sales rose by 1.8 percent, the best showing in three months, but almost all of that strength came from auto sales, which soared by 6.7 percent.

That was the biggest one-month increase since October 2001, when automakers had also strengthened their incentive programs to keep demand from faltering following the September terrorist attacks.

Excluding autos, retail sales were up a smaller 0.3 percent in July, which was just half the gain that economists had been expecting. Still analysts are forecasting a rebound in overall demand in coming months with consumer spending expected to remain strong, reflecting solid gains in employment.

In another report, the Labor Department said the number of Americans filing claims for unemployment benefits declined last week by 6,000, the first drop in three weeks. The decrease left total claims at 308,000, a level that signals continued strength in the labor market.

The 1.8 percent increase in overall retail sales last month was the best showing since a similar 1.8 percent rise in sales in April.

So far this year, consumer spending has remain a solid contributor to the overall economy, which grew at a solid 3.4 percent rate in the April-June quarter. Analysts believe growth in the current quarter is coming in at an even faster rate above 4 percent. Consumer spending is closely watched because it accounts for two-thirds of total economic activity.

For July, the sales gains outside of autos occurred at electronics and appliance stores, which saw sales rise by 1 percent, and gasoline stations, which posted an even bigger gain of 2.4 percent. However, the service station increase reflected in large part the big jump in gasoline pump prices.

However, sales at department stores fell by 1 percent after having risen by 1.4 percent in June. A report on chain store sales last week indicated that the nation's biggest retailers struggled last month to keep sales up following a big surge in June.

The Federal Reserve boosted interest rates for a 10th time earlier this week in an effort to slow the rebounding economy enough to keep inflation in check.