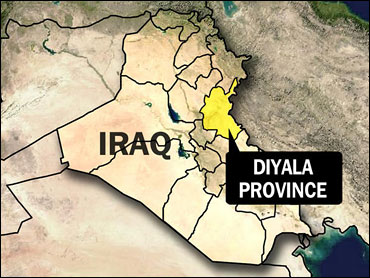 Iraqi officials said a suicide attacker hit a patrol of Humvees and Stryker vehicles in central Jalula, about 80 miles northeast of Baghdad, not far from the Iranian border.

American forces responsible for operations in Iraq's north confirmed the casualties in Diyala province. Names of the casualties were not released, pending notification of family members.

They said three Iraqis, including one police officer, were also killed, and about 22 were wounded in the blast.

Iraqi police, hospital and local officials said four Iraqis were killed, including a policeman and a woman, and 14 others were wounded. The officials spoke on condition of anonymity because they weren't authorized to release the information.

Conflicting casualty tolls are common in the chaotic aftermath of an attack.

U.S. forces have largely pulled back from urban areas in Iraq as Iraqis take responsibility for securing their country ahead of a full American withdrawal by the end of next year. The American death toll has dropped sharply but attacks continue.

Friday's attack raised to at least four the number of American deaths this month, but the two earlier ones were due to non-combat reasons, according to an Associated Press tally.

The Jalula bombing was the second deadly attack in Iraq on Friday.

Three people were killed when a bomb hidden in a pile of trash exploded at a market in southern Baghdad. That explosion, in the capital's Dora neighborhood, wounded 10 people.

Iraqi officials spoke on condition of anonymity because they were not authorized to speak to the media.
By Associated Press Writer Adam Schreck; AP Writer Bushra Juhi contributed to this report