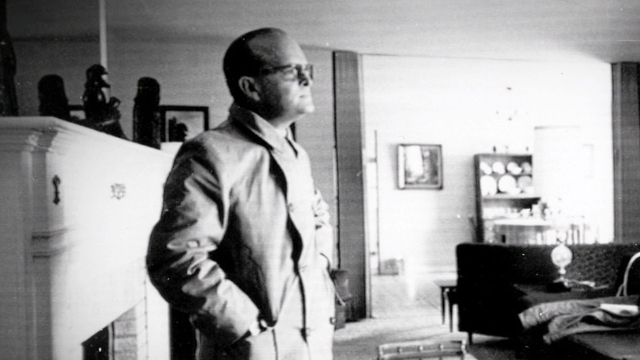 "In Cold Blood" is credited with creating the true crime genre, and Truman Capote is one of the most celebrated writers of his generation. But recently re-discovered notebooks and case records suggest that Capote may have fabricated facts in his story, considered the definitive account of a Kansas family's 1959 murder, reports CBS News correspondent Vicente Arenas.

Capote claimed every word in his book is true. His life and work has been the subject of numerous books and films, including 2005's "Capote" with Oscar winner Philip Seymour Hoffman in the starring role.

"In Cold Blood" recounts the murders of Herbert Clutter, his wife and two children in their Kansas home and how the suspects, Richard "Dick" Hickock and Perry Smith, were caught, convicted and eventually executed for the shocking crimes.

According to Capote, a key break in the case occurred when investigator Harold Nye paid a visit to Hickock's mother and father by himself. In the book and the movie adaptation, Nye coaxed out incriminating information without specifically mentioning the murders. But according to Nye's own records, only Hickock's mother was home at the time and Nye did the questioning with three other investigators.

Retired English professor Ralph Voss has written a book about the iconic author.

"Capote got the the big details right, but he fudged the smaller details in order to make an effective narrative, and he was brilliant at it," Voss said.

Now Nye's son, Ronald, wants to turn his dad's papers into a book and correct the historical record.

Harold Nye was not a fan of either Capote's book or the movie, which gave the lead investigator, Alvin Dewey, the hero treatment and minimized the role of others.

"Nye did a tremendous amount of detective work and then when he saw what had become of this story, he felt somewhat betrayed by Capote," Voss said.

Nye, who died in 2003, eventually became the director of the Kansas Bureau of Investigation, a position he held for two years. Capote died in 1984.

His literary trust did not respond to a request from "CBS This Morning" to comment on this story.