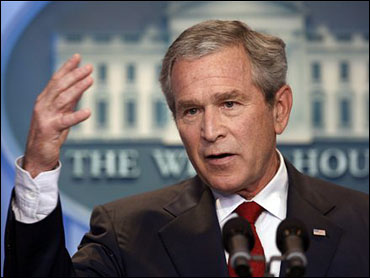 
This is an unusual summer in Washington. The nation's capital is not, for once, consumed by talk of the heat and humidity. Instead, Washington is in the midst of an almost all-consuming political debate on President George W. Bush's Iraq policy.

Will the surge strategy work? How many more of America's sons and daughters have to die in Iraq? Why should we continue to support the government of Prime Minister Nouri al-Maliki when he isn't moving fast enough to make changes? Why can't the war's opponents give the surge strategy a chance to work? How many more Republican senators will go against Mr. Bush's policy? Can the country afford to wait until September, when Gen. David Petraeus and Ambassador Ryan Crocker submit their reports to the White House?

The interim report published this week could be read either way; some areas were deemed as indicating satisfactory progress, others were not. Secretary of State Condoleezza Rice told network interviewers that although al-Maliki's government had not made enough progress, it should be given credit for making some.

However, there are those who ponder a larger question: Is there anything that happens in Iraq that will change anyone's mind in Washington?

"The facts on the ground in Baghdad are the facts on the ground. The problem is those facts don't matter to people in Washington." That's the way one senior administration official who has served in Iraq put it when describing the running debate. "They only matter as people here can use these as deeply held, firmly held, passionate beliefs. People made up their minds a long time ago. It's the foreign affairs equivalent of the abortion debate. People believe what they believe because they believe it — and nothing is going to change their mind."

As long as Congress is in session the debate shows no sign of slowing down. Half a dozen Republican senators have already publicly abandoned their president, and several others have indicated they might. Rice and National Security Adviser Steve Hadley have been working the phones and traveling to Capitol Hill to present the administration's "at least wait until September" case before coming out against the Bush position — but given the number of defections already announced, their efforts do not seem to be working.

Politics, not humidity, is in the air. Most of the Republicans coming out against Mr. Bush are up for re-election next year and they see and hear what people are saying back home: to one degree or another, the American public no longer supports the war in Iraq.

The President and his remaining supporters implore the war's opponents not to be swayed by the political winds.

Even after Congress leaves town for its summer recess, no one should expect the volume of this debate to be turned down. It will only move to another channel, to the campaign stops of both Republican and Democratic presidential hopefuls.

As part of the White House strategy to fill the time between now and September by staying on the offensive, Rice and Defense Secretary Robert Gates are being dispatched to the Middle East next month to talk with our friends and allies in the region. Yes, it always helps to coordinate strategy with your friends — but no one expects these senior American cabinet members to be meeting with anyone from Iran or Syria, the two countries in the region that could do something to ease the security situation in Iraq.

Iran continues to be an obstacle by offering technical expertise and other help to those in Iraq who attack American troops; Syria, the administration says, has done virtually nothing to stop the flow of foreign fighters into Iraq. One senior State Department official refers to Syrian "passivity" when it comes to actions that might help reduce terrorist activity in Iraq.

Two clocks are ticking, but they are not marking time the same way. Notwithstanding the billions in American support, there is no way al-Maliki's government can perform well enough, fast enough to be able to keep time at the pace Washington's election year-driven clock demands. It almost makes Washingtonians yearn for the good old days when summer just meant a steady supply of heat and humidity.