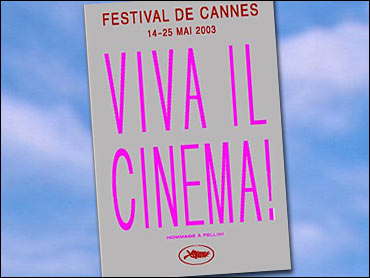 You can't accuse the French of playing favorites with local movie directors at the Cannes Film Festival.

It's been 15 years since a French film won the coveted top prize at the Riviera festival, where European art house pictures share the bill with big-budget Hollywood productions and Asian imports.

But this year's festival, which starts Wednesday, could break France's Cannes curse. Out of 20 movies selected for the main competition, five are French.

On top of that, the jury president, director Patrice Chereau, is a local. It's not easy being French at Cannes, he says.

"I think the French press is tougher, less forgiving with French films than with the others," Chereau, who made the costume drama "La Reine Margot," told France's Studio magazine. To keep things fair, Chereau suggested he might ask the jury not to read the papers.

The French movies at Cannes are a mix. There's a film about a transsexual whose hormone treatments wear off; a tale of a French family fleeing the Germans during World War II; and a French-style take on two grumpy old men.

One young French director to watch is Francois Ozon, who had a hit with "8 Women," a campy murder-mystery starring eight of France's most glamorous leading ladies, from Catherine Deneuve to Virginie Ledoyen. His new English-language movie, "Swimming Pool," focuses on only two women, played by Charlotte Rampling and Ludivine Sagnier.

The lithe, golden-tressed Sagnier is the French starlet of the moment. She appears in another Cannes film, "La Petite Lili," playing a young actress in a show business love triangle.

Before the festival closes May 25, moviegoers will see films from Japan, Brazil and Italy. Hollywood has slightly less presence this year, but organizers say it has nothing to do with French-American tensions over the war in Iraq.

"My feeling about our American partners is, business as usual," said festival President Gilles Jacob. "I see no anti-American sentiment."

In Cannes, plenty of Hollywood stars will glide up the red carpet. Keanu Reeves and the rest of the cast of the sci-fi sequel "The Matrix Reloaded" will be here. The movie isn't in competition but makes its world premiere in Cannes.

Clint Eastwood is competing with the crime drama "Mystic River." He was jury co-president in 1994. That year, his jury awarded a prize to "La Reine Margot" — Chereau's film.

One of the annual guessing games at Cannes is trying to predict the jury's tastes. Members include actress Meg Ryan, Indian superstar Aishwarya Rai — a former Miss World — and Steven Soderbergh, who at 26 became the youngest director ever to win the top Cannes prize, the Palme d'Or, for "sex, lies and videotape" in 1989.

As for the jury president, he says he admires Asian movies, as well as "Breaking the Waves" by Lars von Trier. Von Trier's new movie, "Dogville," which stars Nicole Kidman and is set in 1930s small-town America, is generating big buzz at the festival.

Kidman's appearance is expected to be one of Cannes' highlights. Gossip columnists are waiting to see whether she crosses paths with her ex-husband Tom Cruise's girlfriend, Penelope Cruz.

Cruz is starring in a swashbuckling tale set in the Louis XV era, "Fanfan la Tulipe." The film, which opens the festival Wednesday, is another French movie on the lineup, though it's not competing for prizes.