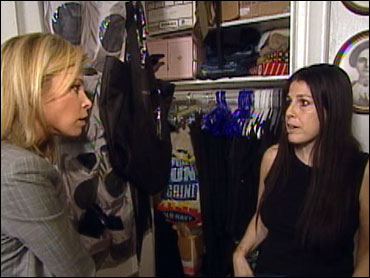 Americans spent more than $7 billion on dry cleaning last year, but cleaning your clothes may affect more than your wallet.

As Early Show national correspondent Tracy Smith points out, there's nothing dry about dry cleaning at all. Clothes are actually washed, in a solvent, one the federal Environmental Protection Agency calls it a possible-to-probable carcinogen, and you could be breathing it in, without even knowing it.

That was what happened with Mori Mickelson and her husband, Danny O'Brien.

The more they stayed inside their New York City apartment, the sicker they got.

"I would get dizzy, I would get headaches, just feel nauseous," Mickelson told Smith.

"I couldn't focus. Basically, my mind was floating away on me," O'Brien says.

It turned out, Smith reports, that the air in their apartment was contaminated with a toxic solvent leaking from the dry cleaner downstairs.

It's called perchloroethylene, or PERC, and it's used by three out of four dry cleaners nationwide.

Judith Schreiber, Ph.D., the chief scientist of environmental protection for the New York Attorney General's Office, says she "would classify PERC as a neurotoxin."

But, too often, PERC vapors can leak into nearby residences and offices, and Schreiber says long-term exposure can cause serious harm.

"You're at risk for neurological effects, liver and kidney illness, and increased cancer risk," she says.

The EPA classifies it as somewhere between a "possible" and "probable" human carcinogen, though at high dosages and over a long period of time. The agency doesn't say brief exposure to PERC, or long-term exposure to very low levels of the chemical will cause cancer. But the EPA admits studies of the carcinogenic effects of PERC in the general population don't exist. The EPA is currently doing a "risk assessment" of PERC, evaluating all research into its potential health effects, and plans to release its findings in about two years.

According to the EPA's Web site, "Breathing PERC for short periods of time can adversely affect the human nervous system. Effects range from dizziness, fatigue, headaches, and sweating, to incoordination and unconsciousness. Contact with PERC vapor irritates the skin, eyes, nose, and throat. These effects are not likely to occur at levels of PERC that are normally found in the environment. Breathing PERC over longer periods of time can cause liver and kidney damage in humans. Workers repeatedly exposed to large amounts of PERC in air can also experience memory loss and confusion. Laboratory studies show that PERC causes kidney and liver damage and cancer in animals exposed repeatedly by inhalation and by mouth. Repeat exposure to large amounts of PERC in air may likewise cause cancer in humans."

You may have gotten a whiff of PERC's strong, fresh scent at your cleaners but, once PERC evaporates into the air, you can't always smell it.

Mickelson had no idea her home was so contaminated until, one day, she literally collapsed from the fumes, and was rushed to the hospital.

"The city Department of Health did tests on us and our neighbors, and it was in our breath and our urine and in my breast milk and my neighbor's breast milk; it was basically everywhere," she says.

Even wearing dry cleaned clothes may put you at risk, Smith observes.

In the first study of its kind, Consumer Reports magazine measured PERC emissions from freshly dry-cleaned blazers and the results, Smith says, were "startling."

The magazine's Jean Halloran says, "We found that there was a small, but definitely increased risk of cancer from wearing freshly dry-cleaned clothes once or twice a week."

The industry calls that junk science.

She says studies of workers at dry cleaners have found no increased risk of cancer, even after years of PERC exposure.

"I have friends and neighbors and family members who are in the dry cleaning industry," Nealis adds, "and I have no compunction whatsoever about their health or safety."

But some regulators aren't buying that.

Last month, California became the first state in the nation to ban PERC, calling it a public health threat. They ordered it phased out at dry cleaners over the next 15 years.

Officials there want them to use environmentally-safer methods such as "wet cleaning," which washes dry clean-only garments using special soap, and plain old water.

But it's not so good for structured garments.

Nealis showed Smith a designer jacket that wet cleaning caused to shrink, and left without what Nealis calls "that nice, finished, like-new look that you went to the cleaners for."

Some dry cleaners call their methods "organic." But that may not be safer than using perc because, the dry cleaners trade group says, there's very little regulation of what "organic" means in their business. All it means for sure is that the cleaning methods include the use of carbon, which could apply to virtually all methods of cleaning.

Another option? Stop buying clothes that require dry cleaning. That's what Mickelson did. She told Smith she now owns only one item, pair of pants, that is dry clean-only.

Though the dry cleaner beneath Mickelson's apartment no longer uses a PERC machine, she still worries about her family's exposure, telling Smith she worries "all the time" about its long-term effects, adding, "When one of us gets sick, I think, could this be something related to PERC? My greatest fear is that one of us is going to get cancer from it."

Experts say, if you live or work in a building that has a PERC dry cleaner, you may want to have your local health department check the level of PERC in the air.

And if your clothes come back from the cleaners smelling like chemicals, it could be a sign they have too much PERC on them, and you should take them back and have them redone.

Experts say unwrapping your dry cleaned clothes when you get home and airing them out could help, but if you take the plastic bag off inside your house, the PERC just goes into the air, where it can last up to a week. It's better to air dry cleaning out in an open garage or outside.

Mickelson says she airs out her dry cleaned pants by taking them for a walk around the block before bringing them home!