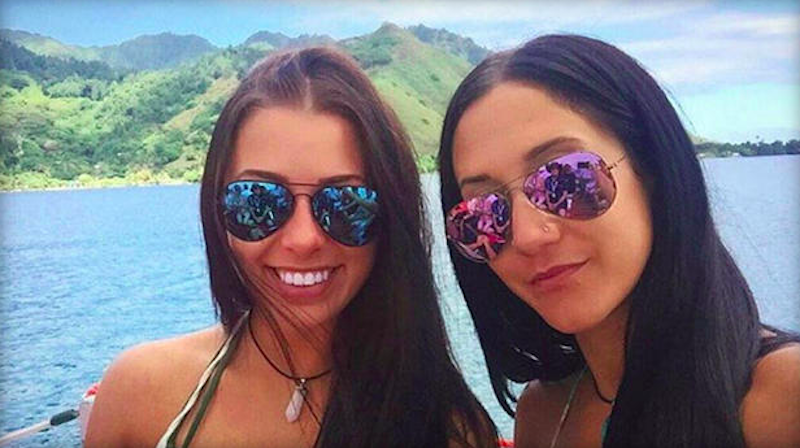 CANBERRA, Australia -- A Canadian woman broke down in tears in an Australian court on Wednesday when she was sentenced to eight years in prison for her part in an attempt to smuggle cocaine worth $16 million into Sydney in luggage aboard a luxury cruise ship.

Melina Roberge, 24, told the New South Wales state District Court that she risked a life sentence in an Australian prison for the opportunity to take selfies "in exotic locations and post them on Instagram to receive 'likes' and attention" during a $17,000 vacation she couldn't afford.

Three Canadians have pleaded guilty to smuggling 95 kilograms of the drug in suitcases aboard the MS Sea Princess during a seven-week cruise in 2016 from Britain to Ireland, the United States, Bermuda, Colombia, Panama, Ecuador, Peru, Chile then Australia.

Roberge was sentenced to a non-parole period of 4 years and 9 months in prison before she is likely to be deported to Canada.

Judge Kate Traill condemned Roberge's motivation for crime as a "very sad indictment" on her age group who "seek to attain such a vacuous existence where how many 'likes' they receive are their currency."

"She was seduced by lifestyle and the opportunity to post glamorous Instagram photos from around the world," the judge said. "She wanted to be the envy of others. I doubt she is now."

Roberge's accomplice with whom she shared a cabin, Isabelle Lagace, 29, was sentenced in November to 7 ½ years in prison backdated to their arrest. Lagace will also likely be deported after serving a non-parole period of 4 ½ years.

Police with sniffer dogs found 35 kilograms of cocaine in their cabin on Aug. 28, 2016, when the liner, operated by California-based Princess Cruises, berthed in Sydney.

Lagace told the court she took part to settle a debt in Canada.

Roberge did not admit her guilt until days before her trial was due to begin in February.

Traill said Roberge was recruited by a wealthy Canadian benefactor, whom Roberge described in court as her "sugar daddy" but never identified for fear of repercussions for her family in Canada, with the lure of a free vacation.

The third accomplice, Andre Tamin, 65, will be sentenced in October. He was caught with 60 kilograms of the drug in his cabin.

In an affidavit admitted to the court, Roberge said that at the time she was "a stupid young woman" who was governed by superficial goals.

"I have devastated so many people in the process," she wrote.

The court heard Roberge met her "sugar daddy" in 2015, and they began an intimate relationship while she worked as an escort for him. He invited her to work as an escort in May 2016 during a trip to Morocco, where he first invited her to join drug-smuggling voyage.

Traill said the then 22-year-old was "there to look pretty," acting as a decoy to the drug dealing below deck.

Roberge told the court she suspected drugs were brought aboard at Peru, because of increased activity during a stopover there.

The judge said Roberge was also motivated by profit. She was promised the ticket, 4,000 euros ($5,000) in spending money plus more cash once she returned home.

The U.S. Department of Homelands Security and the Canada Border Services Agency identified the trio as high-risk passengers among the 1,800 on board. The haul was a record for cocaine smuggled in luggage through an Australian air or sea port.