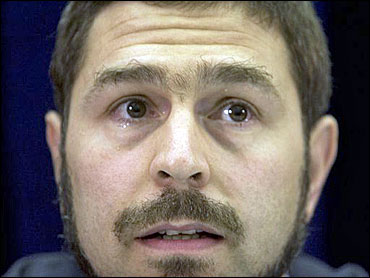 A software engineer falsely accused of being a terrorist by Canadian police was shipped to Syria by the United States, where he was imprisoned and tortured, according to a Canadian commission.

The 2 1/2-year commission of inquiry into the case of Syrian-born Maher Arar exonerated him of all suspicion of terrorist activity and urged the Canadian government to pay compensation.

"They arrested me. They never told me what they had against me," Arar tells CBS News chief investigative correspondent Armen Keteyian. "I was a disappeared person. My family did not know where I was. I knew I was sent to Syria to be tortured."

Arar is perhaps the world's best known victim of extraordinary rendition — or the U.S. transfer of foreign terror suspects to third countries without court approval.

The Washington Post reported that since Sept. 11, the CIA has captured about 3,000 suspected terrorists. Many, the newspaper said, were secretly shipped to other countries, where they were often tortured.

But former counterterrorism official and CBS News consultant John Brennan says rendition does have its place.

"I think it allows us to have the option to move a person, who was involved in terrorism or terrorism-related activities to a country where they can be effectively questioned or prosecuted," Brennan tells Keteyian.

"I am able to say categorically that there is no evidence to indicate that Mr. Arar has committed any offense or that his activities constitute a threat to the security of Canada," Commissioner Dennis O'Connor said in a three-volume report on the inquiry's findings, only part of which was made public.

Arar was traveling on a Canadian passport when he was detained at New York's Kennedy Airport on Sept. 26, 2002, during a stopover on his way home to Canada from vacation in Tunisia.

Arar said U.S. authorities sent him to Syria for interrogation as a suspected al Qaeda member, an allegation he denied.

He spent nearly a year in prison in Syria. After his release in 2003, Arar made detailed allegations about extensive interrogation, beatings and whippings with electrical cable in Syrian prison cells.

Beyond beatings with a two-inch cable - a charge denied by Syria - Arar told CBS News he was held in a 6-foot underground cell, which he calls a "grave."

"This underground cell ended up being my home for the next 10 months and 10 days," he said.

In 2005, Arar spoke with 60 Minutes II's Vicki Mabrey about his . He also detailed his experience in a .

Justice O'Connor also criticized the U.S. and recommended that Ottawa file formal protests with both Washington and the Syrian government over Arar's treatment.

"They removed him to Syria against his wishes and in the face of his statements that he would be tortured if sent there. Moreover, they dealt with Canadian officials involved with Mr. Arar's case in a less than forthcoming manner," O'Connor wrote.

The U.S. already faces intense criticism from human rights groups over the practice of taking suspects to countries where they could be tortured.

President Bush acknowledged earlier this month that terrorism suspects had been held in secret CIA-run prisons in other countries. They included the mastermind of the Sept. 11 attacks, Khalid Sheik Mohammed.

U.S. and Syrian officials refused to cooperate in the Canadian inquiry.

The commission found the Royal Canadian Mounted Police shared information about Arar with American anti-terrorist agencies both before and after he was detained.

The RCMP asked the U.S. to put Arar on a watch list as an "Islamic extremist individual suspected of being linked to the al-Qaeda terrorist movement," the report said.

They did this after Arar met with another man who was under surveillance, a meeting Arar has said in interviews was merely about where to find inexpensive computer equipment.

Police had no evidence linking Arar to terrorist activity yet they asked the U.S. to put him on a watch list as an "Islamic extremist."

"The RCMP had no basis for this description, which had the potential to create serious consequences for Mr. Arar in light of American attitudes and practices," the report said in reference to the climate after 9-11.

"Mr. Arar has, for a long time, said that he was innocent of any terrorism charges. Innocent of being any kind of security threat. We've known that and believed that for a long time," Michael Ratner, president of the New York-based Center for Constitutional Rights, tells CBS News

"This report agrees with that, and says there was never any evidence that Mr. Arar was involved in terrorism or was a security threat. what Mr. Arar wants is an apology from the United States," Ratner adds.

The force also described him as the "target" of a domestic anti-terrorist investigation in Canada when he was a peripheral figure seen in the company of the man who was under surveillance.

O'Connor said much of the material had not been double-checked to ensure its accuracy and reliability — a violation of the RCMP rules for sharing information with foreign agencies.

O'Connor concluded the inaccurate information passed by Canadian police to U.S. authorities "very likely" led to their decision to send Arar to Syria.

"It's quite clear that the RCMP sent inaccurate information to U.S. officials," Arar said. "I would have not have even been sent to Syria had this information not been given to them."

"I have waited a long time to have my name cleared. I was tortured and lost a year of my life. I will never be the same," Arar said. "The United States must take responsibility for what it did to me and must stop destroying more innocent lives with its unlawful actions."

The commission concluded there was no evidence Canadian officials participated in or agreed to the decision to send Arar to Syria.

"It did not occur to them that the American authorities were contemplating sending Mr. Arar to Syria," the commission said, according to the New York Times.

But O'Connor recommends that in the future, information should never be provided to a foreign country where there is a credible risk that it will cause or contribute to the use of torture.

Most of the judge's 23 policy recommendations centered on the RCMP and emphasized the need to improve the force's internal policies for national security investigations and the sharing of information with other countries.

Arar's case has regularly been featured on the front pages of Canadian newspapers and public outcry led to the government calling an inquiry. Canada's federal government established the inquiry in 2004 to determine the role Canadian officials played.

O'Connor also found "troubling questions" about the role played by Canadian officials in the cases of three other Arab-Canadians, Ahmad El Maati, Abdullah Almalki and Muayyed Nureddin. All claim they were tortured in Syria after traveling there on personal business, and all suspect that the RCMP or Canada's spy agency collaborated with their captors.

O'Connor said he could not get to the bottom of those cases because of the limited nature of his mandate. But he urged the government to appoint an independent investigator — something short of a full-fledged public inquiry — to look into those cases.

O'Connor sifted through thousands of pages of documents and sat through testimony from more than 40 witnesses. He delivered two versions of his report to the government: one classified, the other public. But portions of even the public edition of the long-awaited document will be withheld due to security concerns.