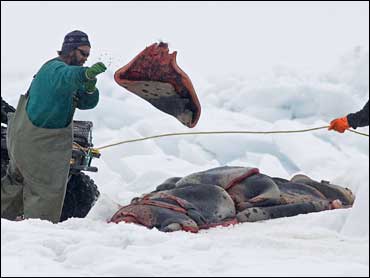 Canadian officials defended the start of the annual seal hunt Monday as a financial necessity for isolated communities, as sealers faced pressure from a possible European Union ban.

Animal rights groups say the hunt is cruel, difficult to monitor and ravages the seal population. But sealers and Canada's Fisheries Department says the hunt is sustainable and humane, and earns money for isolated fishing communities in Atlantic Canada.

"The picture that has been painted in people's minds is that we have small white coat baby seals that are being clubbed over the head and skinned while they are alive. It's just so not true," Gail Shea, the Minister of Fisheries and Oceans, told The Associated Press in a telephone interview.

"Now the population in Europe has bought into this and it has spilled over to the political arena and the politicians are trying to respond to their electorate. There's emotion and politics, and they are missing facts."

The world's largest marine mammal hunt was called "inherently inhumane" earlier this month by a European Parliament committee that endorsed the bill to ban the import of seal products to the 27-member union.

The hunt exported around $5.5 million worth of seal products such as pelts, meat, and oils to the EU in 2006. Germany imported about $1.6 million in seal products in 2006 but many EU countries don't import any, Department of Fisheries and Oceans spokesman Phil Jenkins said.

Jenkins said it's important to keep some European ports open, where many seal products stop on their way to other destinations. Fishermen sell seal pelts mostly for the fashion industry in Norway, Russia and China, as well as blubber for oil.

Canadian politicians lobbied intensely to try to convince the European committee that the hunt is humane. The bill must be approved by the entire EU assembly and EU governments to become law, a move that could come as early as next month.

Rebecca Aldworth, director of Humane Society International Canada, lauded a potential ban, and said it should prompt Canada to end the hunt altogether.

"It's clear to me that change is in the air," she said. 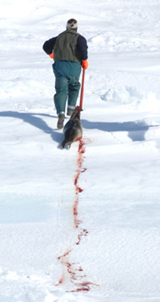 (AP/Stewart Cook, IFAW)
(Left: A hunter hooks and drags a harp seal across the ice on the opening day of Canada's 2008 commercial seal hunt last March.)

EU legal experts say the ban could violate world trade rules, and Canada has warned it could challenge a ban before the World Trade Organization.

The EU bill does grant an exemption to Canada's indigenous Inuit to continue to trade seal products for cultural, educational or ceremonial purposes.

Registered hunters in Canada are forbidden from killing seal pups that haven't molted their downy white fur, which typically happens when they are 10 to 21 days old.

Shea said her department wouldn't be able to control the seal population of about 5.6 million without the hunt.

"I've talked to plenty of people in the East Coast who will tell you that seals are in places that they've never been before. They're abundant and they are eating fish," he said.

Department of Fisheries and Oceans spokesman Phil Jenkins said about 20 sealing vessels ventured out into the ice floes in the southern Gulf of St. Lawrence on Monday, while some land-based hunting is also under way.

The hunt has overwhelming political support in Canada. Earlier this year, Sen. Mac Harb introduced an anti-sealing bill, but he couldn't find a colleague in the 105-seat Senate willing to second his motion to send it to debate.

The pressure on the hunt is growing. The United States has banned Canadian seal products since 1972. The Netherlands and Belgium also ban seal products, and Russia announced earlier this month it would ban the hunting of baby seals.

The European Union already outlaws the sale of the white pelts of baby seals. Seals are also hunted in Namibia, Sweden, Finland and Russia.
By Associated Press Writer Rob Gillies