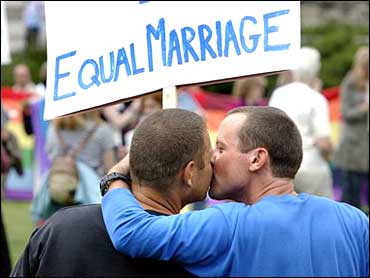 Although gay marriage is already legal in seven provinces, the bill now grants all same-sex couples in Canada the same legal rights as those in traditional union between a man and a woman.

The Netherlands and Belgium are the only other nations that allow gay marriage nationwide.

The legislation, drafted by Prime Minister Paul Martin's minority Liberal Party government, was expected to easily pass through the Liberal-dominated Senate and become federal law by the end of July. It was the last major piece of legislation before Parliament recessed for summer and comes on the first anniversary of Martin's leadership.

Some of Martin's Liberal lawmakers voted against the bill, and his Cabinet minister for economic development in Ontario, Joe Comuzzi, resigned Tuesday over the contentious legislation. But enough allies rallied to support the bill that has been debated for months.

Martin said he regretted losing Comuzzi, but he hailed Tuesday's vote as a necessary step for human rights.

There are an estimated 34,000 gay and lesbian couples in Canada, according to government statistics.

"This is a victory for Canadian values," said Alex Munter, national coordinator of Canadians for Equal Marriage, a group that has led the debate for the legislation.

Martin, a Roman Catholic, has said that despite anyone's personal beliefs, all Canadians should be granted the same rights to marriage.

Churches have expressed concern that their clergy would be compelled by law to perform same-sex ceremonies, with couples taking them to court or human rights tribunals if refused. The legislation, however, states that the bill only covers civil unions, not religious ones, and no clergy would be forced to perform same-sex ceremonies unless they choose to do so.

The Roman Catholic Church, the predominant Christian denomination in Canada, has vigorously opposed the legislation, as well as major Islamic and Sikh orgnaizations whose members believe the law would rock the foundations of traditional family.

"The most overlooked and disenfranchised group in the current debate about marriage is that of children," Calgary Bishop Frederick Henry said in a recent statement.

"The issue is not whether traditional marriage, as it stands, is a perfect institution, but whether society and especially children are better off with it than without. Families with both mothers and fathers are generally better for children than those with only mothers or only fathers. Biological parents usually protect and provide for their children more effectively than non-biological ones," Henry said.

The debate in Canada began in December, when the Supreme Court ruled that passage of same-sex legislation would not violate the constitution.

According to most polls, a majority of Canadians supports the right for gays and lesbians to marry. In the United States, gay marriage is opposed by a majority of Americans, according to an Associated Press-Ipsos poll taken in November, shortly after constitutional amendments in 11 states to ban same-sex marriage were approved.

Massachusetts is the only state that allows gay marriages, although Vermont and Connecticut have approved same-sex civil unions.

"We know that it has been somewhat contentious in Canada, but at the same time the Canadians have largely approached this issue in a rational and democratic way and are providing a very positive model for the rest of the world," Sklar said.

Though hundreds of foreigners have come to Canada to seek civil ceremonies since gay marriages were first allowed in Ontario and British Columbia in 2003, not all countries or states recognize the unions. While a slew of Israeli men were married in Toronto City Hall earlier this year, for example, the Israeli Interior Ministry does not recognize those unions.

In the United States, the federal government does not recognize same-sex marriage and most states refuse to acknowledge marriage certificates from gay and lesbian couples, regardless of where they wed.

"Same-sex marriage rights are extremely variable in the United States and whether Canadian marriages will be respected, state by state, is something yet to be determined," Sklar said.