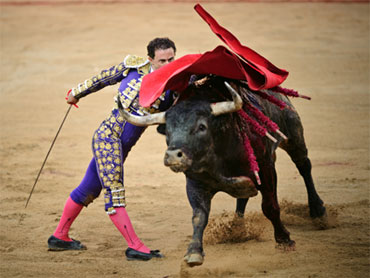 Hordes of humans will sprint ahead of thundering beasts this week at Pamplona's famed running of the bulls, but Spain's most storied fiesta is being overshadowed by a crisis in the bullring.

A proposed regional bullfighting ban is combining with grim economic times to send a chill through the national pastime.

Pamplona's historic old quarter comes under the international spotlight because its bullfights are preceded by thousands of thrillseekers chased by bulls that invariably end up goring some humans on cobblestoned streets en route to bloody deaths in the ring.

But across Spain, the number of bullfights has dropped from about 1,000 in 2008 to a projected 800 or less this year, as local governments that have always subsidized small-town bullfights cut budgets because of declining tax revenue.

Bullfights, or corridas in Spanish, have become a luxury when cuts must be made by town councils to maintain funding for schools, social programs and road repairs.

Making matters worse for bullfighting aficionados, the vast northeastern Catalonia region where more than 10 percent of Spain's 46 million people live could wind up without bullfights when provincial legislators vote on a proposed ban in mid-July.

That would shut down Catalonia's last bullring in the city of Barcelona, though it wouldn't ban other bull spectacles like "correbou," where people chase bulls through the streets and "bouembolat," where bulls are forced to run around with flaming wax balls on their horns.

Animal rights activists say the gory spectacles are one of the planet's most blatant forms of animal cruelty. They hope a ban in Catalonia nine years after the Canary Islands enacted a similar one could prompt other Spanish regions to follow suit.

"It would be a huge step forward, Catalonia telling Spain and the rest of the world that they are not for torturing animals," said Mimi Bekhechi, special projects manager and anti-bullfighting campaigner for People for the Ethical Treatment of Animals.

Bullfight defenders insist the tradition is still so strong that bans are unthinkable across the rest of Spain. They concede, however, that the country's debt woes coupled with 20 percent unemployment and government austerity spending cuts could keep down the number of small town corridas for years.

In Pamplona, the crisis is expected to take a toll for tourism and nonstop street parties during its weeklong festival of bullfighting made famous by Ernest Hemingway's novel "The Sun Also Rises."

Hotels used to sell out three to four months before the event - but not this year.

"You can still find good quality rooms going for around euro100 ($125) and vacancies even in some top class hotels, something unheard of four years ago," said Nacho Calvo of the Navarra Restaurant and Hotel Association.

At the plush, sought-after AC Ciudad de Pamplona hotel, "we have seen fewer foreigners, and this year the absence of Americans is notable, there are hardly any," said manager Gabriel Pascual.

Bullfighting promoter Luis Miguel Ballesteros two years ago put on 27 or 28 small town bull spectacles in villages with populations ranging from 2,000 to 5,000 people each across the Castilla-Leon region, part of Spain's historic heartland.

"The first thing they are cutting are the bullfights, they're spending less money on bulls so they can pay for education," Ballesteros said.

Things are so bad in Estepona, a Mediterranean seaside resort of quaint whitewashed homes, that city officials couldn't find a promoter willing to stage bullfights at the local festival starting Tuesday.

"It did surprise us, but we understand there is not a lot of money out there," said town councilor Carmen Ocana.

Estepona - a town of 70,000 that doubles in size each summer as tourists pour in - normally spends euro250,000 on its weeklong summer festival of music, parades, food and booze. But this year there will be no public spending and no parade. A children's show that used to be free will charge admission. Instead of hiring big-name musicians for concerts, Estepona put out a call for local musicians who will play for free.

Some see a silver lining in the crisis: higher quality fights.

Jose Carlos Arevalo, editor of Spain's top bullfighting magazine, 6 Toros 6, said that in the boom years before the crisis, bullfighting was flush with money. The subsidies for staging fights drew in freewheeling managers and even people who turned to raising fight bulls after getting rich on Spain's real estate boom.

That led to a glut of fights, featuring "semi-empty rings and bouts with any animal that had four legs and two horns," Arevalo wrote in an editorial in last week's edition of the magazine.

Now Spain's economic woes are bringing the industry back into equilibrium, with fewer but more star-studded fights and breeders also trying harder to turn out only top-quality beasts.

Francisco Rivera Ordonez and his kid brother Cayetano are part of a new generation of matadors who, at least until recently, had been bringing more excitement and more spectators into the ring than there had been in years.

Many parts of Madrid take you back many centuries. But don't be fooled - Spain is one of the most modern and progressive counties in Europe. Half the cabinet are women, including the defense minister. There is gay marriage, quickie divorces, legalized abortion, and there is the ancient blood sport of bullfighting. How do you put that all together? It's not easy.

The best answer is probably history, and the Spanish addiction to tradition. Bullfighting started in the town of Ronda in the 18th century. Every September, there is a fiesta.

Tell the people here that the European Union, and many others disapprove of bullfighting, and they will say "So what! Matadors are our national heroes."

But the economic crisis, Arevalo wrote, "has made the men of the bullfighting world come to their senses."