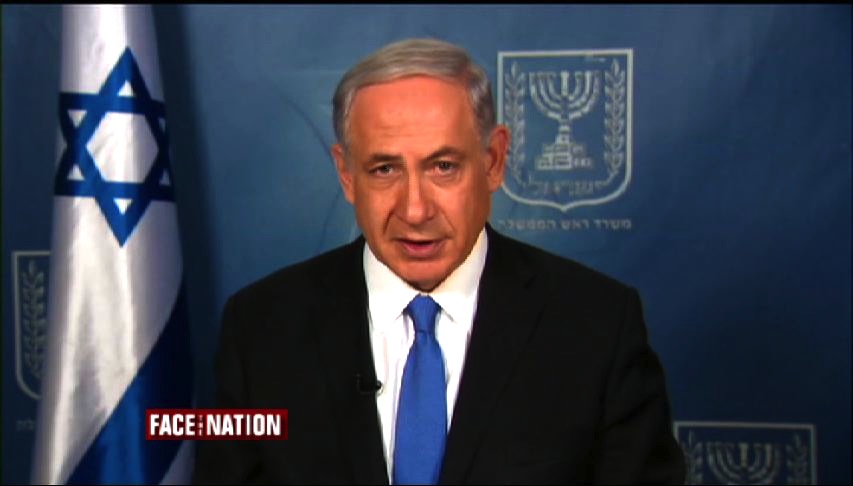 With the recent flare up in violence between Israel and Palestinians in the Gaza strip showing few signs of abating, leaders and spokesman from both sides traded accusations about who is responsible for the deaths of more than 150 Palestinians as a result of Israeli air strikes.

"The difference between us is that we're using missile defense to protect our civilians and they're using their civilians to protect their missiles," Israeli Prime Minister Benjamin Netanyahu said on CBS' "Face the Nation" Sunday. "Naturally, they're responsible for all the civilian deaths that occur accidentally. We're sorry for any accidental civilian deaths, but it's the Hamas that bears complete responsibility for such civilian causalities."

In a separate interview on "Face the Nation," Maen Rashid Areikat, the Palestinian Liberation Organization's chief representative to the U.S., cited Amnesty International to argue that targeting a building with civilians inside is a war crime, even if there is suspicion that a militant was there.

"There may be instances there have been rockets fired from within buildings but does this justify that you kill 170 people?" he said. "I don't think so."

Israel has argued that Hamas has intentionally places missile batteries next to mosques, schools and hospitals, which has turned them into legitimate targets because of terrorist activity there.

"It makes it very difficult for our military to fight this war in a surgical way but we'll do it and we'll continue to uphold the highest standards," Ron Dermer, the Israeli ambassador to the U.S., said on "Face the Nation."

"We haven't targeted many of [the sites] because what we're trying to surgically get at the missile batteries and I think we're doing a pretty good job of it," Dermer said.

He argued that Hamas has deliberately targeted Israeli civilians, but that Israel has tried to minimize civilian casualties.

Despite growing international pressure on both sides to end the conflict, Netanyahu argued that Israel is behaving exactly as any other country would in trying to target the source of rocket fire on its civilians.

"This is an unconscionable terrorist attack on civilian populations. And of course, we have to act to defend ourselves," Netanyahu said.

He would not lay out a timeline for how long the conflict might continue, but both he and Dermer said that Israel's response would only end when there is sustainable calm and quiet for the Israeli people. Netanyahu said a long-term peace would only be possible by rolling back Hamas, which is "seeking to extinguish the Jewish state completely."

Areikat said he would like to see "an immediate cease fire, an engagement, and then moving to deal with the root cause of the issue which is ending the Israeli military occupation of the Palestinian people." He said that is the reason for the ongoing violence, rather than the kidnapping and killing of three Israeli and one Palestinian teen that preceded the rocket fire.

While Dermer agreed there will have to be political talks to advance the peace process, he disagreed with Areikat's assessment of the situation.

Pelosi: "There's an agreement to be reached" with Manchin

Gottlieb says Omicron appears to be a "milder strain" of COVID-19, but pediatric danger remains