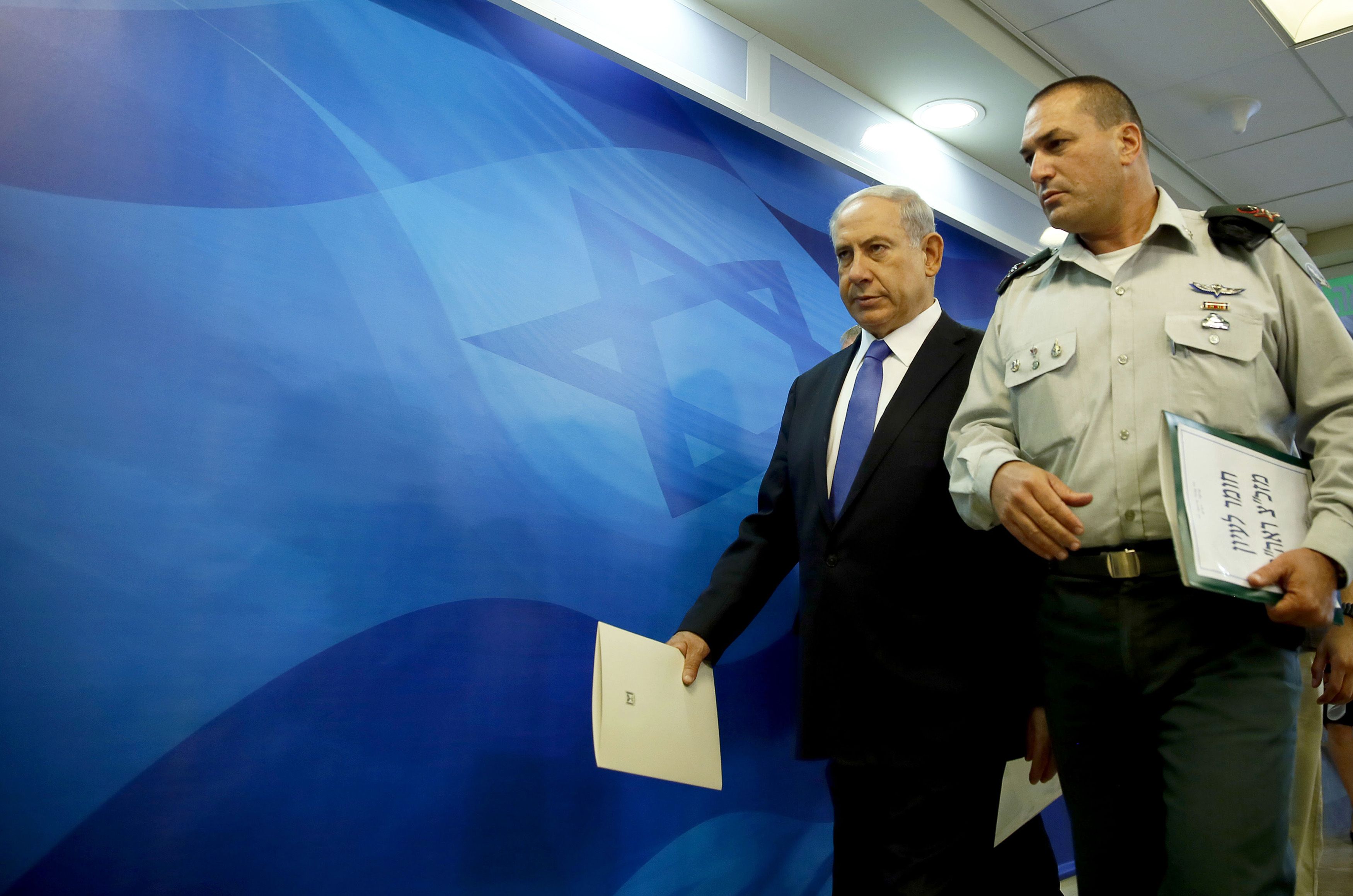 JERUSALEM -- Israel's prime minister says he will not cave in to international pressure to stop a military offensive in the Gaza Strip.

Benjamin Netanyahu told a news conference Friday that Israel will continue its offensive until rocket fire out of Gaza is halted.

He says he has had "good conversations" with a number of world leaders in recent days, including President Barack Obama and European leaders.

"No international pressure will prevent us from acting with all power," he said.

Netanyahu said Israel has attacked more than 1,000 targets in Gaza during the four-day operation and is using twice the force it used during a similar offensive in 2012. More than 100 Palestinians have been killed.

Navi Pillay, the U.N. high commissioner for human rights, said the Israeli military, which claims to have hit more than 1,100 targets that it says are mostly rocket-launching sites, and the Gaza militants, who have fired more than 550 rockets against Israel, must abide by international law.

"We have received deeply disturbing reports that many of the civilian casualties, including of children, occurred as a result of strikes on homes," Pillay said. "Such reports raise serious doubt about whether the Israeli strikes have been in accordance with international humanitarian law and international human rights law."

Pillay says she's seen for herself in Gaza how traumatic the airstrikes and rocket attacks are for civilians, particularly children. Her office says civilians bear the brunt of the conflict now - and all sides must refrain from launching attacks or putting military weapons in densely populated areas.

"Israel, Hamas, and Palestinian armed groups in Gaza have been down this road before, and it has led only to death, destruction, distrust and a painful prolongation of the conflict," Pillay said.

Targeting civilian homes violates international humanitarian law, but not if the homes are used for military purposes. But even then attacks on a home used by a military must be proportionate.

CBS News correspondent Holly Williams reports that Israel says it's targeting those responsible for the attacks as well as the homes of Palestinian militants, which it calls "command centers."

An airstrike on a house in Khan Younis killed a family of eight.

The Israeli military said they were given a warning via telephone to evacuate, but they returned too early, just as the strike hit.

The family's neighbor Reda Kaware gave CBS News a very different version of events.She said the family wasn't able to leave because they were only given two or three minutes to escape the building before the missile struck.

The Palestinian death toll topped 100 people Friday as rockets fired by militants reached deeper into Israel - and for the first time in the fighting, struck from neighboring Lebanon.

Gaza militants already have fired more than 550 rockets against Israel in the offensive. The Israeli military says it has hit more than 1,100 targets, mostly what it identified as rocket-launching sites, bombarding the territory on average every five minutes.

In Gaza, an Israeli airstrike Friday hit the home of a well-known Islamic Jihad leader. Gaza health officials said strikes overnight killed a total of eight people, raising the death toll to at least 98. A later strike pushed the tally over 100 to go along with some 670 wounded, officials said.

In the southern Gaza city of Rafah, residents sifted through the remains of a four-story building that was struck and scattered for cover as another airstrike landed nearby.

Rocket fire continued in earnest from Gaza toward various locations in southern and central Israel, including toward Israel's international airport. The commercial center of Tel Aviv and Ben-Gurion airport also heard warning sirens Friday but these rockets were intercepted and there was no disturbance to Israel's air traffic. Hamas says it intends to fire rockets at the airport and warned foreign airlines to stop flying to Israel.

Israel has shot down at least 110 incoming rockets thus far with its "Iron Dome" defense system.

Gaza rocket fire struck a gas station in southern Israel, seriously wounding one person and sending large plumes of smoke into the air.

In northern Israel, rocket fire struck near the Lebanese border and the military responded with artillery fire toward the source in southern Lebanon, military spokesman Lt. Col. Peter Lerner said.

The Lebanese military said militants there fired three rockets toward Israel around 6 a.m. (0300 GMT) and the Israelis retaliated by firing about 25 artillery shells on the area.

Lebanon's state-run National News Agency said that one of the militants firing the rockets was wounded and rushed to a hospital. The Lebanese military said troops found two rocket launchers and dismantled them.

Southern Lebanon is a stronghold of the Shiite militant group Hezbollah, which has battled Israel numerous times. However, recent fire from Lebanon has been blamed on radical Palestinian factions in the area and Hezbollah has not been involved in the ongoing offensive.

A pair of Lebanon-based al-Qaida-linked groups, the Battalions of Ziad Jarrah and the Abdullah Azzam Brigades, has claimed responsibility in the past for similar rocket attacks on Israel.

Israel launched the Gaza offensive to stop incessant rocket fire that erupted after three Israeli teenagers were kidnapped and killed in the West Bank and a Palestinian teenager was abducted and burned to death in an apparent reprisal attack.

Lerner said the military was doing its utmost to prevent civilian casualties, calling inhabitants ahead of time to warn of imminent attacks. He said Israeli forces also fire "non-explosive munitions" at roofs as a warning and looks for people to leave before destroying a structure.

Lerner blamed Hamas for the death of innocent bystanders by firing from heavily populated areas.

Israeli leaders are mulling whether to launch a ground assault in Gaza to target Hamas. Such a move, though, would likely involve a rise in Palestinian civilian casualties and put Israeli troops at risk as well. Israel has mobilized more than 30,000 reservists to supplement the potential ground operation.

During a ground incursion in early 2009, hundreds of civilians were killed and both sides drew war crimes accusations in a United Nations report.

Middle East envoy Tony Blair said efforts were being made to try and reach a truce.

"We are in a critical point," he said. "I think we have got to do everything we can to ... create a situation in which the people in Gaza and the West Bank and in Israel feel that this is not then going to recur and there is some genuine plan in place."