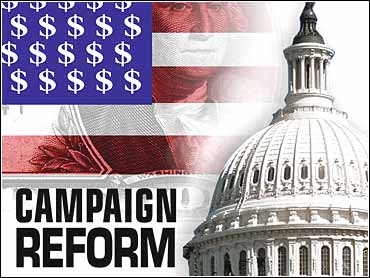 House Republican leaders agreed Tuesday to allow a vote next week on legislation that could bring about the most significant change in campaign spending law in a quarter-century.

GOP leadership aides said the House will devote next Tuesday and Wednesday to the legislation that would limit campaign spending and advertising and require more disclosure of campaign contributors.

"We look forward to a fair debate and are hopeful that reform legislation will once again pass the House," said Katie Levinson, spokeswoman for Rep. Christopher Shays, R-Conn., who has joined with Rep. Marty Meehan, D-Mass., to introduce the leading campaign finance bill.

"I expect that there will be a vigorous debate on this issue that will reflect well on the House of Representatives," said House Speaker Dennis Hastert, R-Ill., who with other GOP leaders opposes the Shays-Meehan approach.

The Shays-Meehan bill would ban the soft money donations that corporations, unions and wealthy individuals now make to federal political parties. It also would bar unions, corporations and some independent groups from broadcasting certain types of political advertising within 60 days of an election or 30 days of a primary.

Soft money donations to the parties have exploded from $86 million in the 1992 presidential election to $500 million in 2000, but repeated efforts to change campaign finance law have died in Congress in recent years. Many Republicans argue that restrictions on contributions are unconstitutional free speech violations.

Last year the Senate, which moved back into Democratic control, passed similar legislation offered by Sens. John McCain, R-Ariz., and Russ Feingold, D-Wis. But efforts to push Shays-Meehan through the House last July collapsed after a procedural dispute and GOP leaders have resisted giving supporters of the bill another chance.

To revive their bill, Shays and Meehan resorted to a little-used procedure called a discharge petition, whereby signatures from 218 House members, a majority of the body, can force leaders to bring a bill to a vote.

Supporters of the bill last month achieved that goal, with the last few signatures secured in the wake of revelations that Enron, the collapsed energy giant, had made large donations to lawmakers from both parties.

"We asked for a fair vote and we are going to get one. Bring it on," said Scott Harshbarger, president of the advocacy group Common Cause.

Under rules for the debate, opponents of Shays-Meehan are allowed to offer an alternative which is expected to be legislation sponsored last year by Rep. Bob Ney, R-Ohio, that does not ban soft money but requires more disclosure of political donations. The opposition can also offer amendments that Shays-Meehan supporters will try to defeat.

The bill's supporters hope for the House to pass a bill that is almost identical to that approved by the Senate, to avoid a House-Senate conference that could result in the legislation getting stalled or hanged.