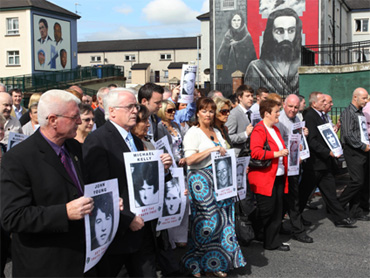 Cameron says the report shows there is "no ambiguity" about what happened that day, and that British soldiers fired first and even killed injured protesters trying to flee.

The prime minister said Tuesday that the conclusions from the 12-year investigation were "shocking conclusions to read" and that he is "deeply sorry" for what happened.

Relatives of the 13 dead Catholic demonstrators and their lawyers received copies of the 5,000-page report several hours before Britain officially published the findings. The inquiry -- the biggest and most expensive fact-finding investigation in British legal history - was authorized by Former Prime Minister Tony Blair in 1998 in response to demands for the truth of Bloody Sunday to be exposed.

The relatives said they expected their loved ones - branded bombers and gunmen in the original 1972 British investigation - to be exonerated and the soldiers found guilty of committing illegal killings, a verdict that could open the door to criminal prosecution.

Before receiving the report, the Bloody Sunday families mounted a mournful procession to the city hall in Londonderry bearing pictures of the 13 people killed and 15 wounded by army gunfire on Jan. 30, 1972.

Soldiers that day charged into crowds of Catholic demonstrators in the city's hard-line Bogside district at the end of an illegal march that had been blocked from reaching the city hall. The soldiers claimed to have been responding to Irish Republican Army gunfire and to have targeted armed rioters, but no soldiers suffered injuries. The year 1972 went on to become the deadliest in the four-decade conflict over Northern Ireland.

"The soldier who killed my brother shot him in the back. My brother was unarmed. That's murder, plain and simple," said Joe McKinney, one of the 56 victims given the report amid tight security inside Londonderry's city hall.

Security officials removed cell phones and computers from the relatives and their lawyers to ensure they could not leak details of the findings.

The investigation, led by English judge Lord Saville, heard evidence from 921 witnesses including former British government officials and the soldiers who opened fire that day.

Saville gave the paratroopers anonymity in the witness box - citing the risk that IRA dissidents might target them in retaliation - and broad protections from criminal charges. But legal experts say wiggle room remains for prosecutions and civil lawsuits against retired soldiers now in their 60s and 70s, particularly if lawyers can demonstrate the soldiers told lies to Saville.

The original 1972 investigation by another English judge, Lord Widgery, took barely two months to produce a 39-page report that chided soldiers for gunfire that "bordered on the reckless." But Widgery accepted soldiers' claims to be responding to IRA attacks and said he suspected - despite any solid forensic or witness evidence beyond the soldiers' own claims - that some of those killed "had been firing weapons or handling bombs in the course of the afternoon."

During Saville's investigation, several IRA witnesses - including former IRA commander Martin McGuinness, who today is the senior Catholic in Northern Ireland's power-sharing government - testified to Saville that their members were unarmed on the day and did not shoot at troops.

"The citizens of Derry, to a man and woman, want Saville to make it absolutely clear that the people who were shot on that day - murdered and injured - were completely innocent people and that those people who inflicted those deaths and injuries were the guilty parties," McGuinness said.