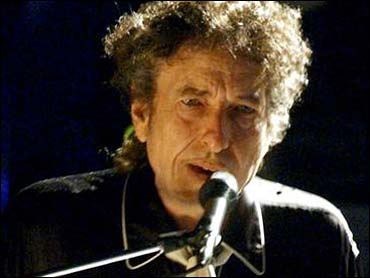 Bob Dylan accepted an honorary doctor of music degree Wednesday from Scotland's oldest university. He was speechless, but a professor at the University of St. Andrews sang his praises.

"Many members of my generation can't separate a sense of our own identity from his music and lyrics," professor of English Neil Corcoran said in an awe-struck address.

Dylan's fusion of folk, blues, country, rock and poetry, Corcoran said, "moved everything on to a place it never expected to go and left the deepest imprint on human consciousness."

"His magnificent songs will last as long as song itself does," he added.

Founded in 1413, St. Andrews, northeast of Edinburgh, is Britain's third-oldest university and one of its most prestigious. Its current students include Prince William, second in line to the throne.

The university also awarded honorary degrees to Harvard philosopher Hilary Putnam and Cheryll Tickle, one of Britain's leading biologists, along with degrees for 180 graduating students.

Dylan has accepted only one other honorary degree, from Princeton University in 1970.