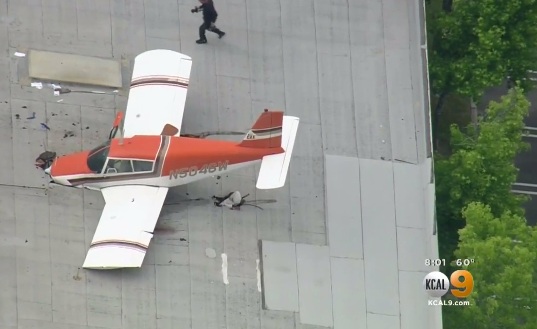 BOYLE HEIGHTS, Calif. -- The pilot who made an amazing crash-landing on top of a Pomona, California, building, said Monday he was lucky, CBS Los Angeles reported.

Don Bach was transferred from Los Angeles County USC Medical Center in Boyle Heights to another hospital Monday night, one day after safely landing his single-engine Piper on the rooftop of a state parole office on Corporate Center Drive in Pomona.

The 61-year-old, who has 40 years of flying experience, suffered broken bones in his right arm and right leg as well scrapes.

He told CBS Los Angeles that he was getting ready to land when the engine started to fail.

"When I got down to about 50 knots, I knew it was going to stall, and I really only had one option," he said.

So he did what any experienced pilot would do in an emergency.

"Then he called air traffic controller and tell him: 'May Day, May Day.' And he looked down, and he see the traffic, the freeway, housing. So he just tried to find a safe place to land," Bach's wife, Connie, said.

With little power, somehow Bach guided the plane to the top of the parole office building after avoiding homes, people and the nearby 10 and 57 freeways.

"Thank you Lord for putting the building there with a soft roof," Bach chuckled.

He crash-landed the plane so skillfully, the aircraft sat on the roof almost so perfectly between two beams that a building inspector said prevented the plane from collapsing the roof.

"There's many scenarios he could have been killed or worse damage or gone on to the freeways. So it was an incredible job what he did to get that plane down," said building inspector Mike Neely.

Because the building has been red-tagged, employees will work at a different location until inspectors determine how much damage was done, and when it is safe to enter.