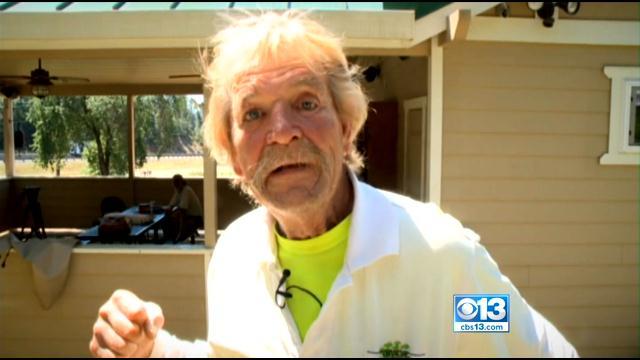 PLACER COUNTY, Calif. -- A northern California man came face-to-face with a bear outside his home. He didn't run. He didn't call wildlife officials.

Instead, he said he wound up and punched the bear in the face, CBS Sacramento reports.

Carl Moore is not a guy who scares easily.

"The man or beast that I run from ain't been born, and his momma's already dead," he said.

He's 73 years old with a wiry frame and one heck of a character. And it turns out he's also quite a bear fighter.

"I ain't run from nothing; I never have in my whole life and I ain't going to start now," he said. "And you're not going to sacrifice my babies for some damn bear."

The other week, Lacy, the dog he loves like a daughter, started whimpering outside. Carl ran out and there it was--a bear who had no idea what world it just stepped into--Carl's world.

"And I raised both hands in the air and I cussed at him, 'Rrraaaaaaa! Get out of here you bastard, and he looked at me like 'Go eff yourself," he said.

What happened next can only be described as insane.

Carl landed a whirling haymaker, punching the bear right in the face--bear-handed if you will.

"He come up like this, and turned, boom, I hit him hard. Tyler said I damn corkscrewed his head," he said.

We've all heard of a tall tale--the big fish that got away, so was Carl up to it? Well, if you talk to John Sargent, who's known him for 25 years, he'll say you bet.

"Carl just smacks it, I couldn't believe it," he said.

He's a friend and an employee with the construction company Carl owns. He says the bear was a bit shorter than Carl, but still a formidable opponent. After talking to them for awhile, it's no surprise that Carl punched a bear.

The bear is long gone and likely in no rush for another Foothill fist fight with the new reigning champ. But if he does return, you know Carl will be ready with that right hand.

"This guy's a jerk, but he ain't been back since he's been smacked by Carl," Carl said.