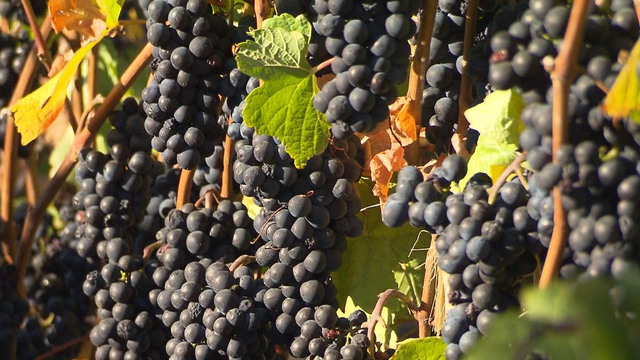 In Napa Valley, home to some of California's prized vineyards, the vines are looking healthy, despite the state's historic drought, reports CBS News correspondent Ben Tracy.

Michael Honig, who owns a 67-acre vineyard in Napa, said the lack of rain in the past three years has produced some of the best wine California has seen in nearly a decade.

"Dry years are good because it forces the vine to find water on its own and really penetrate deeply into the soils," he said. "You want to stress out a vine to a point. You want to go as far as you can before you go off that cliff and can't go any further," he said.

In normal conditions, the roots of grape vines grow 10 feet deep, but in dry conditions, they are forced to burrow twice as deep in search of water. The stressed-out vines produce a smaller grape but one with more concentrated sugar and complex flavor.

"We really want ripeness to get the fruit character that we need to make these really lush, expressive wines," he said.

He said you can taste the difference between grapes grown in a wet year from those grown in a dry year.

"In a wet year the fruit does not get as ripe," he said.

A 2011 vintage wine produced in a wet year tastes a bit green.

"It's almost like eating your vegetables in a glass," Honig said.

However, there is one big problem with the smaller grapes. If you make wine based on quantity, not quality (think Two Buck Chuck), it's now more expensive to produce. That could lead to higher prices for consumers. And a prolonged drought can cause salt to build up in the soil and eventually damage the vines.

But for now, Honig is still happy to be drunk on drought.

"If this continues for the rest of the year, we are going to create another stellar vintage in the Napa Valley," he said.

Lenny Kravitz on finding his voice