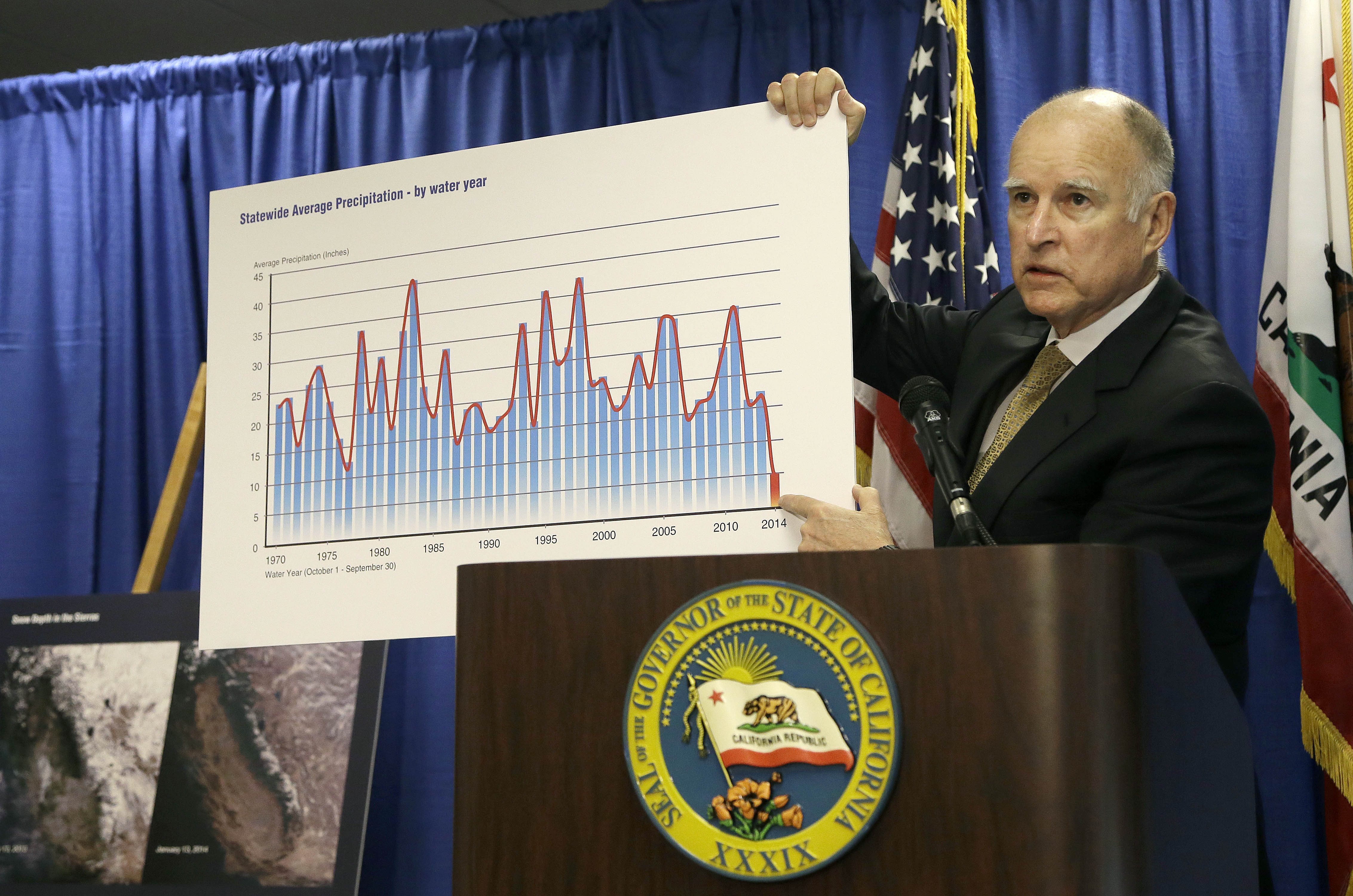 SAN FRANCISCO -- Gov. Jerry Brown formally proclaimed California in a drought Friday, saying the state is in the midst of perhaps the worst dry spell it has seen in a century, and the conditions are putting residents and their property in "extreme peril."

Brown made the announcement in San Francisco amid increasing pressure in recent weeks from the state's lawmakers, including Democratic Sen. Dianne Feinstein.

The proclamation allows California to request a broad emergency declaration from President Barack Obama, which would expedite some water transfers, provide financial assistance and suspend some state and federal regulations.

"Today, I'm declaring a drought emergency in the state of California because we're facing perhaps the worst drought California has ever seen since records began being kept 100 years ago," Brown said.

The drought and water shortage are creating "conditions of extreme peril to the safety of persons and property" in the state, the proclamation said. For example, some cities are in danger of running out of water, and people in farming communities that will not be able to find work will need assistance getting food.

Brown spoke against the backdrop of a chart with statewide average precipitation by year dating back to 1970 and a satellite image of California in January 2013 and January 2014 side by side that showed the state's dwindling snowpack.

He encouraged people to voluntarily conserve water but said his administration is considering a mandatory conservation order.

"I think the drought emphasizes that we do live in an era of limits, that nature has its boundaries," the governor said.

The U.S. Drought Monitor has reported extreme drought conditions in central and northern California, and there has been little snowfall so far this winter.

Precipitation in most of the state is less than 20 percent of normal, and reservoirs are dwindling. Forecasts suggest the dry spell could continue, exacerbating the already heightened fire danger.

The proclamation came as firefighters chased flare-ups in a damaging wildfire that has kept thousands of people from their homes in the foothill suburbs northeast of Los Angeles.

The fire around Glendora has swept through about 2 1/2 square miles of tinder-dry chaparral and destroyed five homes. It was 30 percent contained.

She said the declaration will be a "sign of hope" for farmers and field hands in one of the nation's most important agricultural regions.

Droughts also are persisting or intensifying elsewhere in the West.

On Wednesday, federal officials said they were designating portions of 11 drought-ridden western and central states as primary natural disaster areas, highlighting the financial strain the lack of rain is likely to bring to farmers in those regions.

Agriculture Secretary Tom Vilsack said he and Obama want to ensure that agriculture remains a bright spot in the nation's economy.

Officials with the U.S. Drought Monitor say a ridge of high pressure is to blame for keeping storms off the Pacific coast and guiding them to the East. Poor snowpack also is threatening regions dependent on major western rivers.

Patzert says what's known as "Pacific decadal oscillation" has warmed waters in the upper Pacific. That has created a strong high pressure system pushing the jet stream north. It's so persistent meteorologists have nicknamed it "The Triple R": ridiculously resilient ridge of high pressure.