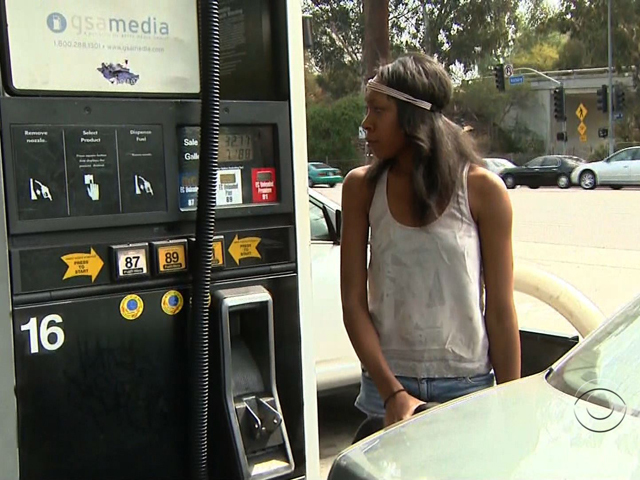 SAN FRANCISCO - The rise in California gasoline prices has slowed after recent jarring increases, but nonetheless the cost of a gallon inched up to another record high, even as officials hope their emergency action will help ease the sticker shock.

The average price for regular gas in the state on Tuesday was a bit over $4.67 a gallon, according to the AAA's Daily Fuel Gauge Report. The price was a state record and the highest in the nation.

The cost increased only a fraction of a cent overnight, however, compared to nearly 50 cents in the past week.

The highest average price in the state, at $4.75, is in Central California, in the San Luis Obispo area. San Diego average prices are at $4.72 a gallon, and the Los Angeles area about $4.71.

Analysts said the spike has been driven by refinery disruptions and corrosion issues in an important pipeline.

Also contributing to the high prices, California law, in an effort to reduce air pollution, requires that gas stations during warmer months use a special blend of fuel that is not widely available.

State leaders and drivers hope to see gasoline prices drop soon because Gov. Jerry Brown has ordered the California Air Resources Board to allow so-called "winter-blend" gasoline to be sold in California earlier than usual to increase supply.

California usually converts to the gas on Oct. 31. The fuel evaporates in heat more quickly than summer-blends, so sends more pollutants into the environment, especially in warm weather.

Gil Duran, a spokesman for Brown, said the governor looked at all the options available, particularly scientists' prediction that such a change would not have a significant effect on the environment, and "when he learned this could increase the supply by 8 to 10 percent, it just made sense."

Sunday's action was the first time since 2005 when gas supplies were affected by refinery disruptions in the wake of Hurricane Katrina that the air board has approved early conversion to winter-gas blends.

Officials said it could take days before prices fall, depending on how quickly refineries can get the winter-blend fuel to market.

"The gasoline market moves on news, and this is clearly good news in terms of supply, because it should be able to increase supply immediately," said Alison apRoberts, a spokeswoman with the California Energy Commission.

Record-setting prices at the pump has also prompted calls for a federal investigation.

Sen. Barbara Boxer, D-Calif., on Monday asked the Department of Justice's oil and gas price fraud working group to look into whether maintenance issues at refineries were being used as an excuse to drive up energy prices.