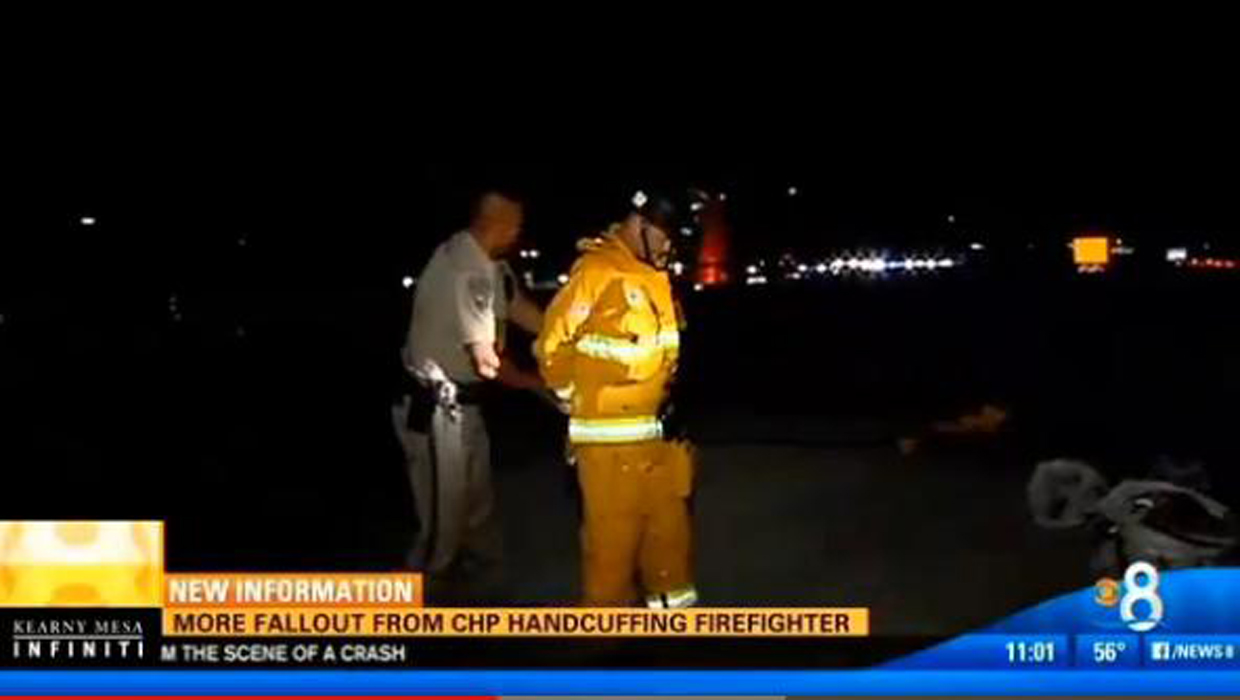 CHULA VISTA, Calif. – A Chula Vista firefighter was handcuffed and detained on Tuesday by a California Highway Patrol officer after he refused to move his fire engine from a crash scene, CBS affiliate KFMB reports.

The unidentified officer reportedly asked Jacob Gregoire, a 12-year veteran of the Chula Vista Fire Department, to move his truck out of the way at the scene of a rollover car accident on Interstate 805 in California’s South Bay region. When Gregoire, 36, refused and continued giving aid to crash victims, he was handcuffed at the scene in front of reporters.

Gregoire was detained in the back of a CHP vehicle for roughly half an hour and then released.

“I just want to let you all know he’s arresting me,” Gregoire said to reporters. He is also heard saying to the officer, “It’s unbelievable you guys have to treat us like this. We are trying to help you.”

The officer then replies, “We asked you to clear the road, you said ‘No.’ You are being arrested for not moving.”

CHP has not released any information about the officer. It is unknown whether or not he was reprimanded for the incident.

A joint statement released Wednesday afternoon by the Chula Vista Fire Department and the CHP said, “This was an isolated incident and not representative of the manner in which our agencies normally work together toward our common goal.”

Officials said the officer told firefighters to move three fire engines out of the fast lane on the highway. Two complied, but Gregoire refused the request.

KFMB’s Phil Constantine, who previously worked with the CHP for 20 years, said there was nothing illegal about the officer’s actions. “Whether it’s justified, I can’t comment on,” he said.

The driver of a white Honda involved in the crash was taken to a hospital.

“The protocol for the fire department is to protect the scene. When we arrive on these traffic accidents cars are going at a high rate of speed, especially at night. We will block lanes to protect our firefighters and our paramedics,” Concialdi said. “More firefighters and police officers are hurt on the freeway or on the side of a major road than in a gun battle or in a fire.”

Concialdi said that the fire department and Orange County CHP generally work well together. “They have our backs and we have their backs. It’s a close-knit community,” he said.

Concialdi, with 24 years in fire service, said he’s never heard of a firefighter being arrested while doing his job.