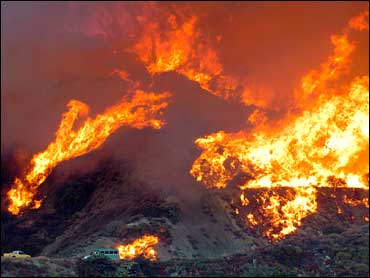 A fire raging on hillsides in southern California threatened Wednesday to leap across the main commuter artery of Interstate 5, keeping firefighters hoses aimed at hotspots near the freeway and hoping the wind would die down.

The Day Fire, near Castaic, forced authorities to close part of I5 until Wednesday morning, when the fire that has already charred almost 25,000 acres since it started on Labor Day renewed its threat against the busy highway.

Reporting from along I-5 Wednesday morning, KNX News Radio reporter Diane Thompson said most residents of the Paradise Ranch Mobile Home Park, which sits on the east side of the freeway, opposite the Day Fire's flames, don't seem too worried.

"These fires are up here every year, so unless I see the fire in the park, I'm not really that concerned right now," one seemingly unbothered resident told Thompson.

Another park inhabitant stressed preparedness but exhibited no signs of imminent panic. "Everybody's got things ready to go, as long as you know where your kids are, that's what's important," she told Thompson.

In the northern part of the state, firefighters were beginning to make some progress in battling a fire that's been burned for more than a week in Placer County.

Authorities say they now have the Ralston Fire 53 percent contained.

The fire had consumed more than 7,300 acres near Foresthill — a community about 50 miles northeast of Sacramento — since it began last Tuesday.

Smoke from the fire prompted health officials to remind residents of Sacramento's eastern suburbs to stay indoors as much as possible.

Authorities said the cost of fighting the fire had reached more than $7 million.

It won't help in California, but firefighters who have had a long, hot season in the Pacific Northwest may have been granted a silver-lined cloud Wednesday from weather forecasters.

The National Weather Service forecast much cooler temperatures and rain Thursday and Friday for the east slopes of the North Cascades.

Even fire managers conceded Wednesday that residents of Stehekin, Washington were anxious, frustrated and in some cases angry that the Flick Creek fire continued to threaten the remote mountain community nearly seven weeks after it was started accidentally by a campfire.

Stehekin sits at the northern end of 60-mile-long Lake Chelan in mountainous northcentral Washington and is reachable only by boat, float plane, horse or foot. The town is surrounded by wilderness, the North Cascades National Park and U.S. Forest Service land, making it a haven for tourists looking to escape busy lifestyles.

The Flick Creek fire, however, has blackened more than 7,040 acres to within yards of the National Park Service visitor center, a post office and several other buildings.

Authorities ordered a mandatory evacuation of the boat landing, effectively halting tourism. About 60 full-time residents remained under notice they may have to leave if the fire grows.

In Oregon, the Portland-based Northwest Interagency dispatching agency listed six major fires, including one in Crater Lake National Park that started in July and has been allowed to burn, within limits, on about 2,500 acres.

In the Cascade Range, firefighters said they had contained all but one fire, which has been burning since Aug. 19 in the Mount Jefferson Wilderness Area.