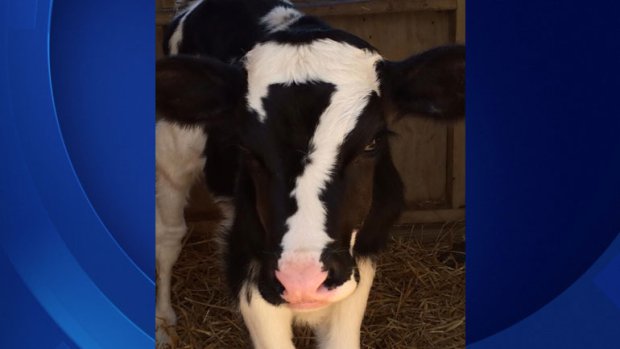 LORETTO, Pa. -- Moooove over, Ben Roethlisberger. There's a new No. 7 in western Pennsylvania.

The folks at Vale Wood Farms in Loretto have named a calf Baby Ben after the Pittsburgh Steelers quarterback because the cow has a marking that looks like a No. 7 on its head.

A photograph of the calf went viral after the farm has posted it on its Facebook page.

CBS Pittsburgh visited the Steelers locker room to get reaction from players.

"I see the big '7' on the forehead. I've never seen a cow like that," said Brad Wing, the Steelers punter. "That could be a sign from above," echoing fans who think the number means the team will win a seventh Super Bowl.

"That's not Photoshopped, is it?" Steelers center Maurkice Pouncey asked. "I think Ben needs to buy this."

"My college number was seven. Could be my cow," said Steelers defensive end Stephon Tuitt.

And at least one player wants the calf to have a long life.

"Is that a cow that should be made into a 'Roethlis-burger,' or should it be saved?" reporter Dave Crawley asked.

The farm plans to display the calf when it opens its pumpkin patch for business next month.