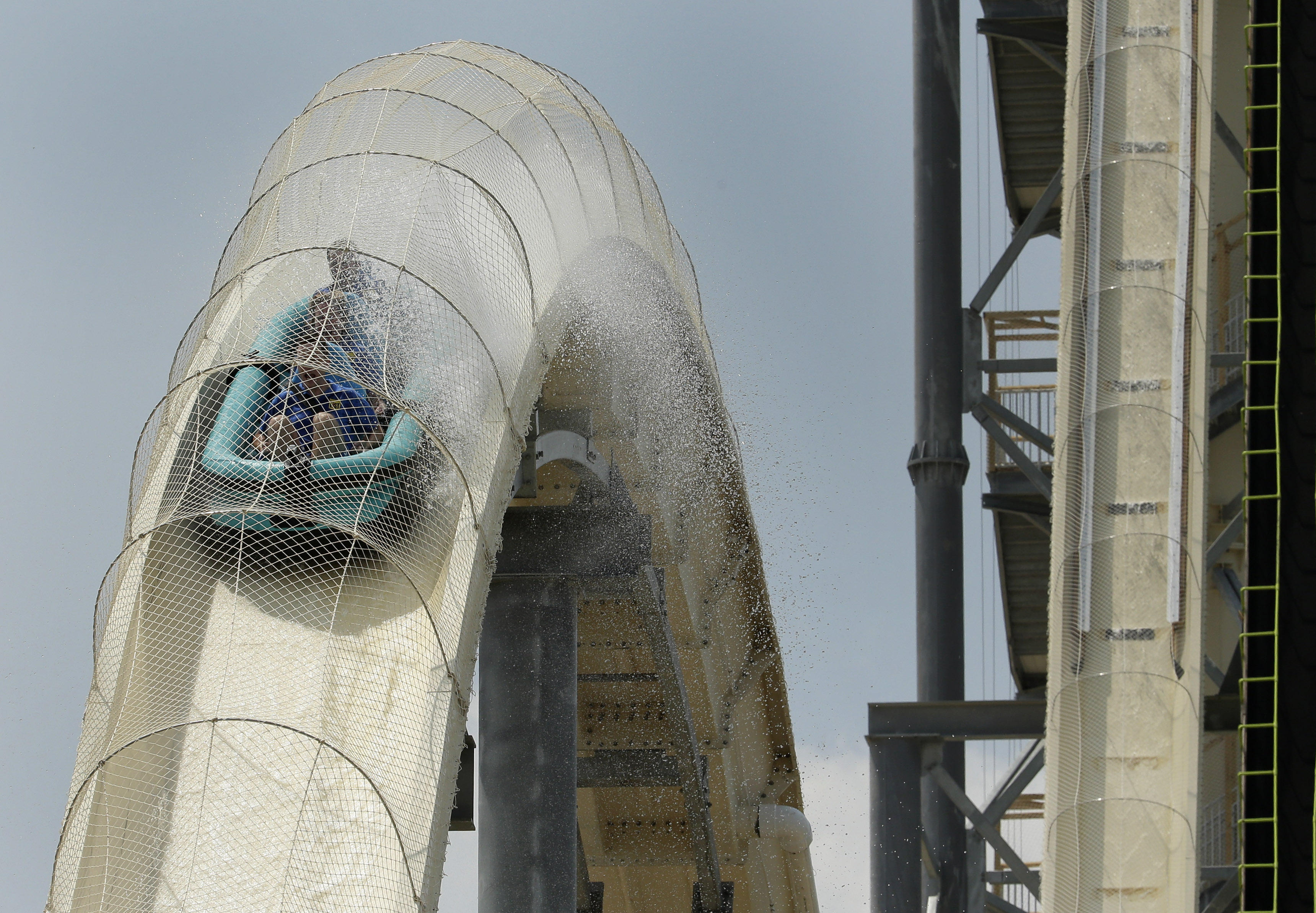 TOPEKA, Kan. -- Ken Martin remembers a Travel Channel episode about the world's tallest waterslide. The Richmond, Virginia-based amusement-park safety expert said he was horrified that test sandbags flew off the ride and that nylon straps with Velcro restrained multiple riders on rafts dropping 17 stories at up to 70 miles per hour.

"I am sitting on my couch and I am thinking, 'Oh my God. What are these people thinking?'" Martin recalled in an interview. "I started praying for anyone who got on that ride."

The Verruckt waterslide was a big attraction for the Schlitterbahn park in Kansas City, Kansas, from its opening in 2014- until a 10-year-old boy's decapitation in August 2016 forced it to shut down. A Kansas grand jury earlier this month indicted the Schlitterbahn Waterparks and Resorts and Verruckt's co-designer on numerous criminal charges, including second-degree murder over Caleb Schwab's death.

As water parks prepare to open across the country for the summer season, the Kansas indictments highlight the inconsistent patchwork of state regulations that cover amusement parks.

The federal Consumer Products Safety Commission says it knows of 12 deaths at water parks and another 22 at other amusement parks since 2010, and about 40,000 emergency room visits by park patrons in 2016.

Schlitterbahn said in a statement on its website that all rides are "thoroughly inspected daily" by supervisors and managers and annually, by both an insurer and another "independent third party." The company said indicted co-owner Jeffrey Wayne Henry has designed rides "the world over" and, "Nearly every water park that exists today has an attraction or feature based on his designs or ideas."

At the time of Caleb's death, the International Association of Amusement Parks estimated that more than 85 million people safely visited water parks each year.

Schlitterbahn's Kansas City park plans to open as normal in May, according to the company's website. The Verruckt ride will be idle but has not yet been torn down.

When Verruckt was built, Kansas had lax regulations and Martin -- whose company is certified to inspect rides in four states -- said the state still has weak oversight. Caleb was the son of Kansas state Rep. Scott Schwab, a Republican from the Kansas City suburb of Olathe, and lawmakers passed a law last year requiring annual checks by qualified outside inspectors. But it allows park employees to do daily inspections through the season. On Wednesday, the Kansas House approved a bill to weaken the rules for rides at short-term annual fairs and events such as hayrack rides to allay the misgivings of rural legislators.

"We certainly should have adopted those other regulations sooner," said state Rep. Jene Vickrey, a conservative Republican.

Local officials did check Verruckt to see if the ride met their building codes so that, for example, the tower had metal staircase rails and not wooden ones. But they did not pass judgment on its engineering, nor did the state.

Saferparks, a nonprofit California group seeking to prevent amusement park accidents, says 20 other states provide comprehensive oversight. New Jersey requires ride manufacturers to get their ride types certified by the state and has licensed inspectors to review rides, and 22 have state inspections.

The Kansas grand jury indictments allege that Henry made a "spur of the moment" decision in 2012 to build the world's tallest waterslide to impress the producers of a Travel Channel show. The indictments allege Schlitterbahn skipped "fundamental steps in the design process" because Henry and ride co-designer John Timothy Schooley lacked the necessary expertise.

But Schlitterbahn is disputing the allegations of poor engineering and shoddy planning, saying the indictments are "filled with information we dispute." Henry and Schooley hold numerous patents for everything from conveyor roller belts to flow systems for water parks, through their New Braunfels, Texas-based company, Henry, Schooley & Associates.

In a 2016 story in the real estate blog Curbed, Henry said his specialty was "transportainment," designing artificial rivers that carry visitors throughout water parks rather than the more daring waterslides.

Schlitterbahn said comments attributed to Henry and Schooley in the indictment and used to bolster the criminal case against them are based on television outtakes "scripted for dramatic effect and highly edited."

Blaine LaCesne, a law professor at Loyola University in New Orleans, called the criminal charges against Henry and Schooley "legally baseless." A regular media commentator on legal issues arising from a giant oil spill in the Gulf of Mexico in 2010, LaCesne said he contacted a family attorney for Schooley, who was an acquaintance, and plans to follow the cases closely.

He said too many events occurred between the slide's design and Caleb's death -- including design modifications and "thousands" of rides without injuries -- to warrant such criminal charges.

"The danger of this is you've got a sensational case that is highly emotional," he said. "You never know what a jury will do because of the especially strong empathy for the victim."

But Martin, reflecting on what he saw on the Travel Channel, had a different reaction: "Poor Caleb," then, later, "he didn't have a chance."