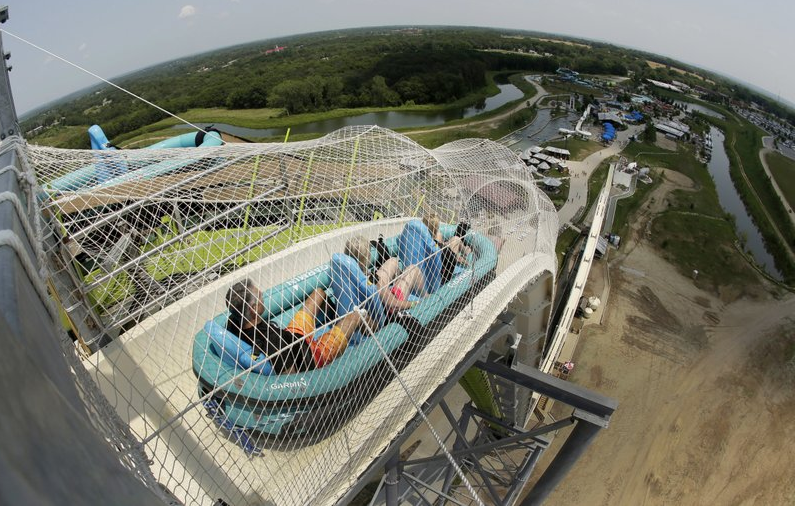 KANSAS CITY, Mo. -- A former executive for a water park company was charged Friday with involuntary manslaughter in the death of a 10-year-old boy who was decapitated on a giant waterslide at a Kansas water park. Tyler Austin Miles, 29, a former operations director of Schlitterbahn Waterparks and Resorts, pleaded not guilty Friday during a brief court appearance.

He is the first person criminally charged in the Aug. 7, 2016 death of Caleb Schwab, the son of Kansas Rep. Scott Schwab, at the Schlitterbahn water park in Kansas City, Kansas. He was on a raft with two women on the 17-story "Verruckt" waterslide -- billed as the world's tallest waterslide -- when the raft went airborne, hitting a pole and netting designed to keep riders from being thrown from the ride.

Schlitterbahn, which is based in Texas, said in a statement Friday that it was "deeply disappointed to learn any individual is being personally charged for the terrible accident on Verruckt.

"Our review of the facts and circumstances of the accident has never shown any evidence of criminal conduct on the part of anyone," spokeswoman Winter Prosapio said.

Scott Schwab and his attorney, Mike Rader, didn't immediately respond Friday to a request for comment.

Miles' attorney, Tricia Bath, said during Friday's hearing that Miles started at Schlitterbahn as a lifeguard and worked his way up to operations manager. She said Schwab's death was a "horrible tragedy."

Verruckt -- German for "insane" -- included multi-person rafts that made a 17-story drop at speeds of up to 70 mph, followed by a surge up a hump and a 50-foot descent to a finishing pool. It received national publicity when it opened at the park in 2014.

The waterslide has been closed since Caleb's death. Schlitterbahn has said it will dismantle the ride when the investigation into the boy's death is complete.

Caleb Schwab's family reached settlements of nearly $20 million with Schlitterbahn and various companies associated with the design and construction of the waterslide. The two women who rode with Caleb suffered serious injuries and settled claims with Schlitterbahn for an undisclosed amount.

Before the boy's death, Kansas law allowed parks to conduct their own annual inspections of rides. Lawmakers last year nearly unanimously approved stricter, annual inspection requirements for amusement park rides that set qualifications for the inspectors and required parks to report injuries and deaths to the state.

But only weeks later, lawmakers passed a follow-up bill delaying the enforcement of criminal penalties for operating a ride without a state permit until this year. And this year, the Senate and a House committee have approved legislation to lessen regulation for "limited use" rides at events like county fairs and exempt some amusements, such as hay rides, from regulation.