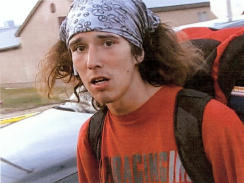 (CBS/AP) ELIZABETH, N.J. - A man who gained Internet fame as "Kai the Hatchet-Wielding Hitchhiker" has been indicted on murder charges in the beating death of an elderly New Jersey man.

McGillvary is accused of killing 74-year-old lawyer Joseph Galfy, whose body was found May 13 in his Clark home. McGillvary was arrested in Philadelphia days later.

McGillvary had suggested on his Facebook page before that he had been sexually assaulted by Galfy at the man's home saying, "What would you do if you woke up with a groggy head, in a stranger's house, realizing that someone had drugged and raped you? What would you do?"

McGillvary is represented by the public defender's office, which doesn't comment on cases.

The Canadian gained some online fame after intervening in a February assault on a California utility worker in which he described using a hatchet to fend off a further attack.